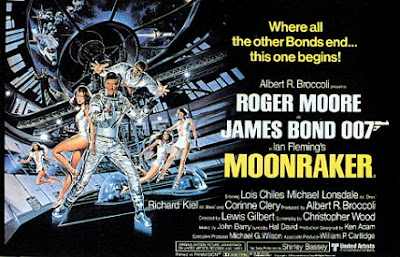 Me: Wow, that sucked.

Her: Hey, don't I usually say that?

Her: Wow, that sucked.

Me: But that was just terrible. It's as if they forgot they were making a Bond film.

Her: Yeah, I mean, what's with the whole "Jaws falls in love" subplot? Seriously? They actually had them running to each other in slow motion. It felt like they were making a Bond parody. Although there was one scene I really liked.

Me: Let me guess - it was the sequence with the woman running through the forest while being chased by dogs?

Her: Yes, how did you know?

Me: I don't know, I just knew you'd like that bit. It was like something out of a horror movie, but it was beautifully shot and looked great, even if it was the result of a stupid idea.

Her: I know! Why the hell didn't she get back into the golf cart instead of just running into the woods? That was infuriating, but at least the bit where she ran through the woods looked pretty.

Me: I can't remember a film that isn't a horror movie where so many characters have made so many stupid decisions. "Hi, I'm James Bond. I know I'm on a super-important mission for Queen and country, but gosh I really want to ride in a centrifuge machine-thingy right now. What could possibly go wrong?"

Her: That wasn't terribly flattering for Roger Moore's face.


Me: He's starting to look a bit old in places during Moonraker - maybe it was because of the centrifuge.

Her: How many more Bond films does he do?

Her: Good, I still like him. He still looks good.

Me: Did you like anything else in the movie?

Her: No, not really. Although, surprisingly, I thought the plot was quite good - the whole "destroy mankind and start again" thing. I liked that idea. But it was all sewn together terribly.

Me: Agreed. It's as if they had a shortlist of things they wanted to do and linked them all haphazardly. "Ok, parachute stunt, centrifuge machine, woman chased by dogs, gondola that turns into a car, Star Wars. Done. Print it."

Her: I'm surprised they didn't bust out lightsabres during the finale. They may as well have. I kept thinking I was watching one of your stupid Star Wars movies again.

Me: Wow, here I was impressed that you used the word "lightsabres" in a sentence and then you had to go and ruin it....

Her: Anyway... did you like anything about the movie?

Me: The parachute stunt was pretty cool. Strangely, I only just watched Point Break a couple of days beforehand, where they did the exact same stunt and thought it was cool then, so to know they got the idea from James Bond makes it even cooler. Also, the special effects in the final showdown on the space station were impressive. The moment when the gravity is turned off was pretty spectacular. But the whole thing is just too absurd. The Jaws romance, the centrifuge, the gondola-car, Q's "re-entry" double entendre, the double-taking pigeon....

Her: Oh come on, the double-taking pigeon was kinda cute.


Me: It was ludricrous. And Lois Chiles was good as Holly Goodhead, but once again she wasn't given much to work with. And as far as villains go, Drax was kind of underwhelming.

Her: I liked his dogs. I thought his display of control with them was intimidating.

Me: Yeah, but he was an idiot. Drax tried to have Bond killed before Bond even had a clue that Drax had anything to do with the theft of the Moonraker. Talk about dead giveaway.

Her: So we're in agreeance that this was a crap 007 movie.

Me: The crappest. Which means things can only get better from here.

Her: Here's hoping. If any more of them feel like a lost Austin Powers movie, I'm outta here.


BlogalongaBond will return in For Your Eyes Only.