BlogalongaBond: You Only Live Twice


Way back in 2011, my favourite film critic The Incredible Suit figured out there were exactly the same amount of months preceding the release of Skyfall as there were Bond films. And thus BlogalongaBond was born, in which international film critics from around the world (hence the international bit) reviewed one Bond film a month until Skyfall dropped. 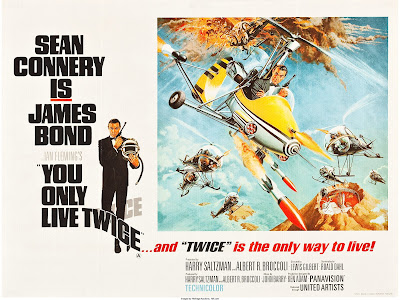 Me: I actually hadn't seen that one before.

Her: I thought you'd seen them all.

Me: A couple may have slipped by me during my teenage years... those were crazy times.

Her: Didn't you live on a farm as a teenager and mostly sit in your room and listen to Nirvana?

Her: Anyway, did you like You Only Live Twice?

Me: Absolutely. I think it's up there with Thunderball and Goldfinger as being one of the best Bond films. It's got a good script in particular, written by Roald Dahl, don't you know?

Her: It was in the opening credits.

Me: Oh yeah. Were you intrigued that the guy who wrote Charlie & The Chocolate Factory wrote a Bond film?

Her: Yeah. Absolutely. What you said.

Me: They're all things to do with helicopters.

Her: Oh, and I liked the ninjas.

Me: You liked the ninjas and the helicopters? What are you - a 10-year-old boy?


Her: Ok, ok. But those bits were awesome - when the ninjas suddenly materialised on the volcano, it was a cool moment.

Me: And I have to agree the helicopter battle was quite spectacular, a few dodgy shots aside and the fact Connery looked kind of stupid with his crash helmet and his little yellow autogyro.

Her: Because a crash helmet's going to save your life when that thing falls out of the sky.

Me: True. He didn't seem to have a parachute on either.

Her: Speaking of parachutes, is it just me or was Helga's method for attempting to kill Bond incredibly stupid?

Me: Yeah, that section of the film didn't work. Helga captures Bond and threatens to peel his face off, then Bond works the mojo and she tricks him into getting on a plane with her before trapping him in the plane and parachuting out as it crashes.

Her: Trapping him with a piece of four by two, no less.

Me: Indeed. Not the most efficient way of killing a super-spy.

Her: Another thing that bugged me was the Bond girls. They were... kind of unneccessary.

Me: Obviously there has to be a love interest...

Me: ... so the Bond girls are necessary to an extent. And Aki did save Bond's life about three times. But, agreed, Helga was pretty useless. And I don't think it was necessary for 007 to actually marry Kissy.

Her: I did like that wedding scene though. I always enjoy the culture-ish bits in the Bond movies.


Me: What? Sumos raising their legs and showing off their notchas wasn't culture-ish enough for you?

Her: I was trying to block that from my memory. Thanks a lot.

Me: Sorry. Anyway... how about the rest of the positives? I think the script is really good - a few plot-holes aside - and the set design is fantastic. The Osato office, Blofeld's lair, the volcano rocket-launch pad, Tiger Tanaka's home... it all looked amazing.

Her: Agreed. The direction was pretty good too, as was the cinematography.

Me: I thought I was the film reviewer - aren't I supposed to say those things?

Her: Oh... sorry. Would you like to mention something movie snobbish, say about the score or something?

Me: Oh yeah. I'm not much of a fan of the theme song but I liked the bit of the soundtrack in the final rocket pre-launch sequence... it was in a really cool Propellerheads song.

Her: That didn't sound movie snobbish.

Me: Sorry. How about "the pacing of the film was excellent, particularly the opening act, and the dialogue really sizzled in places, giving the film a comedic edge that pushed it above the previous installments"?

Her: That's much better. There were some good lines... amid the groan-worthy ones. I hope it doesn't get any cheesier though.

Me: Just what until Roger Moore takes over.

Me: To be honest, I haven't seen all of On Her Majesty's Secret Service so I can't fully appraise George Lazenby's performance. But he's an Australian, so that's something.

Her: I've got to say I'm a bit nervous about a Bond film without Connery. But it's ok - I'm kind of hoping there's a crap one soon so these blogs will get more interesting.

PS. Can you believe we made it all the way through without mentioning how unconvincing Sean Connery is as a Japanese man?

BlogalongaBond will return in On Her Majesty's Secret Service.


THERE'S a formula to the Fast & Furious series: hot cars, hot women and... well... that's about it.

The first film succeeded because it felt fresh with its cops-versus-street-racers set-up, but interest waned until Diesel returned to re-fuel the tank for the fourth installment.

Now we have F&F5, but before you yawn, hear this: it may well be the best one of the series so far.

It picks up where F&F4 left off, with ex-cop Brian O'Conner (Walker) and his buddies freeing Dominic Toretto (Diesel) from a prison bus and going on the lam to Rio de Janiero.

Unable to resist the temptation, Brian, Dom and Dom's sister Mia take a job stealing cars from a train, which lands them in the crosshairs of Brazilian crimelord Reyes (Joaquim de Almeida) as well as some American agents (led by Dwayne "No Longer The Rock" Johnson).

Where F&F5 gets interesting is when it effectively becomes an Oceans film, embracing the heist genre to excellent effect. By bringing together a who's who of the previous four films, facing them off against two sets of antagonists, and throwing in a bank job unlike any you've ever seen before, the film-makers have found a way to re-inflate the series' tyres while giving it a new paint job at the same time.

Don't go looking for anything particularly deep beneath the sleek exterior though. A few moments saluting the importance of family - whether you're brought together by blood or a thirst for crime - are the only relief from the action, which is wall-to-wall.

But that's what you go to a film like this for - the foot-to-the-floor adrenaline - and that's why this succeeds. The final heist is a ripper, the opening car-vs-train set-piece is very cool, and the favelas of Rio once again prove to be the perfect setting for some running and gunning.

It's big, loud, dumb, over-the-top and mostly substanceless. But it works, perhaps better than ever before.
Posted by DrMattNeal at 23:09 No comments: