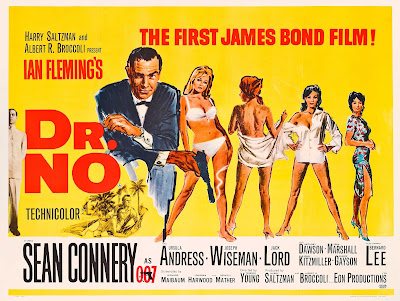 Me: So what did you think?

Her: I almost fell asleep.

Me: Really? That bad?

Her: But it was okay.

Her: Some of the acting was pretty bad. The photographer, that chick at the start (Sylvia Trench)... and how come the woman who came out of the water (Honey Ryder) was talking without her lips moving properly sometimes?

Me: She was dubbed because her accent was considered too strong.

Her: Why didn't they just use a different girl without an accent?

Me: I think it was because they thought she had the right look.

Her: You're telling me they couldn't find another attractive blonde without an accent?

Me: Good point. That bit where she comes out of the water is pretty sexy though... it's an iconic moment in cinema.

Her: Yeah, I was a bit disappointed by that actually. I thought that was supposed to be a super-sexy scene. I reckon it was sexier when Halle Berry came out of the water in a bikini.

Me: I thought you said you hadn't seen a Bond film.

Her: I haven't. I saw it on an ad or something.

Her: No. That girl that came out of the water was good.

Her: I know. I was just messing with you. Yeah, he's pretty good. Bit of a sleaze though.

Me: Yeah, I guess his attitude towards women is very "of it's time". And Quarrel - the way Bond spoke to him reminded me that this was an era where the Commonwealth still thought of black people as someone to be potentially colonised. Some elements of the film haven't aged very well. Like that car chase in the middle is pretty bad... I mean, I don't mind rear-projection, but that chase is edited poorly, lacks suspense, and the sound of screeching tyres on gravel - that just got on my nerves.

Her: And why did Bond insist on turning the steering wheel so much when the car was supposedly going straight ahead? I hate it when they do that in movies.

Me: Me too. Maybe that's how you drive movie cars. So what did you like about the film?

Her: Hmmm... it was entertaining. I dunno - I was pretty tired. But it was good. I think I may have missed part of the plot.

(Five minute discussion about how Felix Leiter fits into it is omitted for brevity.)

Her: Ah, I see. Yes, that makes sense. Sort of. But why did Bond sleep with that girl if he knew she was a double agent?

Me: Yeah, I don't know. He just does that kind of thing.

Me: Definitely. It's flawed and gets a bit flat in the middle, but Connery carries it all beautifully and his head-to-head with Joseph Wiseman as Dr No is great. That line about which side of the glass you're on is gold, too. And there are so many iconic elements to the film. The set design of Dr No's lair is remarkable, the music is truly special, and the plot is surprisingly solid. And there are a couple of scenes that really stand out as being fantastic - the brief conversation he shares with Moneypenny is spot-on for capturing the nuances and weird friction of their relationship, and the belated introduction to Bond is perfect. Although I will add that Quarrel is annoying and his character is too poorly defined to make him anything other than a Jar Jar Binks precursor.

Her: You didn't say those things during our actual conversation - you just made them up when you wrote this to seem smart.

BlogalongaBond will return in From Russia With Love.