BlogalongaBond: A View To A Kill 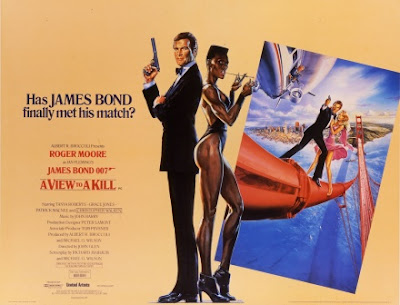 Her: Ok, first up, here's something we've never seen in a Bond film before: a supervillain who's so evil that he shoots down his former employees with a machine gun while they're trying to escape a flooded mine. On the scale of Bond baddies, that's pretty up there.

Me: True. I wasn't sure about Christopher Walken as an antagonist because he was typically... well... Walken-esque, but that was indeed a new level of psychotic for a Bond villain. And he was reasonably charismatic throughout.

Her: I thought he was great as Max Zorin. One of the best Bond baddies ever, up there with Goldfinger and Blofeld. He's certainly the most purely evil antagonist. Everyone else is either a caricature or I can't remember them.

Me: You can't remember Scaramanga?

Her: Which one was that?

Me: The Man With The Golden Gun. His off-sider was the little fellow from Fantasy Island.

Me: What about Dr No?

Me: The first villain. Metal hands. Secret base on an island.

Me: Do you remember any of the villains?

Her: Come on, we've seen 14 of these movies and you expect me to remember them all?

Me: "And you ekshpect me to talk?"

Her: Anyway, back to the movie. Zorin is a good baddie because he's actually hands-on with his mass murder. None of this "nuclear weapons from a distance" thing - he takes time out from his grand plan of wiping Silicone Valley off the face of the planet to get in a bit of a machine gun massacre. And still be "right on schedule".


Me: So if you liked Zorin so much, does that mean you liked the film?

Her: Yeah, I did. It felt a little long in places and there were still the obligatory silly moments but overall, I think A View To A Kill ticks all the boxes. It's up there with the better Bond films.

Me: Out of the 14 we've seen I certainly put it in the top seven. It did drag in places though, you're right. I mean, Bond spends an inordinate amount of time investigating horse race fixing, and while it does flow on to a larger plan, it takes up a lot of the first half of the film and actually turns out to be irrelevant.

Her: Agreed. Finding out why Zorin had such good race horses didn't add much to the plot, did it?

Me: No, not really. I did like Sir Godfrey, though. There was some good comedy in having a knighted secret service agent pretending to be Bond's put-upon man-servant.

Her: Yeah, he was a good character. And the Bond girls were pretty good. Stacy Sutton was alright and May Day was a good villain - even if her outfits were the epitome of everything that was wrong with '80s fashion.

Me: So, Bond girls good, plot good, villain good - anything else?

Her: Also, the stunts were pretty good.

Me: How cool was the car chase? They landed that freakin' car on a bus and drove off the other side!

Her: The chase on the Eiffel Tower was pretty cool as well, although I don't see how you can kill someone with a butterfly on a fishing hook.


Me: That one baffled me. But yes, the Eiffel Tower made for a decent set-piece... although using the Eiffel Tower and the Golden Gate Bridge as backdrops for action sequences may have been overkill, but they worked.

Her: You know what didn't work? Using a zeppelin as an escape vehicle.

Me: You're right. If you thought it took a long time to inflate in the movie... well, apparently it took 24 hours in real life.

Her: Yeah, what happened to supervillains using submarines or rockets for their getaways?

Me: Indeed. So, overall, we agree that A View To A Kill was all right?

Her: It was better than all right.

Me: Even with the jarring use of California Girls during the opening chase when James Bond invented snowboarding?

Her: I can see nothing wrong with that sentence.

Me: Well, I guess we're agreed that it was a good film for Roger Moore to bow out as Bond, even if he didn't like it very much.

Her: Wait a minute - that's his last film as Bond? But Roger Moore is James Bond!

Her: But I want more Moore!

Me: There isn't anymore Moore.

Her: Aww, but I liked Moore. I want more Moore!

Me: There's no more Moore.

Her: No more Moore?

Me: No more Moore.


BlogalongaBond will return in The Living Daylights.

Posted by DrMattNeal at 02:12 No comments: