IF you'd dismissed this college comedy about rival vocal groups as some kind of lame Glee cash-in, think again.

Pitch Perfect is actually one of the funniest movies of 2012. It's a wild blend of often surprising comedy, some pretty cool a cappella arrangements, and a great ensemble cast.

Best of all, thanks to a smart script, it dodges the majority of mawkish moments that would have led to this being a typical college-based rom-com with a musical backdrop.

Kendrick stars as Beca, the music-loving freshman who is only attending college to appease her father and is more interested in making DJ mixes and mashups.

Despite no desire to fit in to life on campus, she's eventually convinced to join the all-girl a cappella group The Bellas (after being overheard singing in the shower), who are desperate for revenge in the national a cappella championships against the highly acclaimed all-boy group The Treblemakers.


On paper, this all looks oh-so High School Musical: The College Years, but the beauty of Pitch Perfect is they way it turns its formulaic moments into unexpected hilarity. There is a welcome edginess to its humour, so the potentially silly shower-singing scene suddenly becomes awkwardly amusing, while characters such as Fat Amy (a never funnier Rebel Wilson) and the almost-inaudible Lilly (Hana Mae Lee) drop in with excellent non-sequiturs, put-downs and wisecracks.

Even token characters - the bitchy lead Bella, the douchebag head Treblemaker, the nerdy magician - feel more than tokenistic thanks to an overall attitude that puts an alternative spin on some mainstream ideas. The film even borrows the "wacky commentator" schtick from the likes of Dodgeball, Best In Show or Baseketball, and does it really well.

Beca is a great character and Kendrick nails the role. She's social but only to a point, independent but often frustratingly so, and restrained despite her determined attitude. It all makes for an engaging and well-rounded female lead - a refreshing relief amid so many films led by cliched manic pixie dream girls, tightly wound workaholics, or the damaged party girl.

Kendrick has good chemistry with Astin, who plays a Treblemaker with a crush on Beca, while the blend and bounce within the Bellas makes for good entertainment.

One of the few downsides is it's a little too "pitch perfect" - ie. some of the "spur of the moment" sing-offs are unbelievably over-produced and miraculously arranged, occasionally giving the movie the feel of a proper musical, rather than just a musically inclined comedy. This also pulls you out of the moment and reality of the film somewhat.

The film also can't help but do the expected when it comes to the crunch, but the laughs along the way make this well worth it, and you'll find yourself craving the satisfying ending after such an enjoyable journey.

Along with The Muppets, Pitch Perfect is one of the best and most surprising comedies of 2012.
Posted by DrMattNeal at 02:09 No comments: 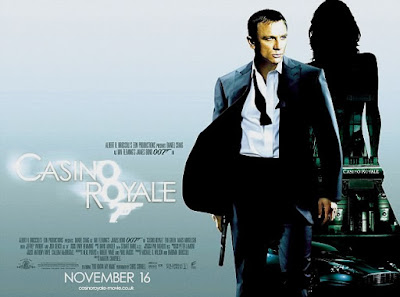 Her: That wasn't a Bond film.

Me: I guess this is a more modern Bond for the new millenium - a more realistic one in tune with the films of the time. And I think that in trimming some of the fat off what was becoming an increasingly bloated franchise during the Brosnan years, it allowed the series to get back to the bits of Bond that really matter.

Her: But that's not Bond! How does this have 'the bits of Bond that really matter'?

Me: Well, without a surplus of gadgets, he has to rely on his wits, his strengths and his gun. That makes him a better, more believable spy. And I could do without the cheesy one-liners and the poorly written romances and flings, and the daft caricature villains and the invisible cars. And besides, weren't those a lot of the things you complained about in the other movies?

Her: Yeah, but those things are Bond! And, on top of that, this guy's not Bond.

Me: I've told you before about the theory that James Bond is just a position or identity taken on by a different spy each few years....

Me: But this movie backs up that theory nicely.

Her: Look, I don't see how this is a proper Bond film. It's not like the others.


Me: It is in lots of ways. Bond is still a debonair ladies' man who gambles, drinks and fights for Queen and country, stopping idiosyncratic baddies from their evil plans using his brains and brawn. In fact, you could argue that this is the best Bond film ever.

Me: Well, it doesn't make any of the mistakes that hamper so many of the other films. There are no serious flaws and everything it does, it does well. It handles its relationships well, particularly that of Vesper and Bond, as well as the dynamic between M and Bond. Its villain isn't ludicrous and is actually scary. Nor is the film brainless. The dialogue is sharp, the set pieces are brilliant and there's not a dud performance to be seen. Also it's dark and messed up, which is something that's been hinted at before but never so fully embraced.

Her: You mean the scene where Bond gets tortured....

Me: Yes. My balls are still aching in sympathy. But sore nuts aside, I think Casino Royale takes everything great about Bond, discards the rest, and gives us something that is not slavish about the series' history, yet is still very much 007 in spirit. It's learnt from the mistakes of the past, embraced the trends of the time by realising that 007 looked anachronistic compared to Jason Bourne or even Ethan Hunt, yet never lost sight of what Bond represents - the epitome of cool, clever, and kick-arse.

Me: Yeah, but this is a rare moment in history....

Her: Can we just get back to the movie?

Me: Just say it one more time.

Her: Sigh. You're right.

Me: Thank you. Ok. So did you enjoy Casino Royale, despite its unBondyness?

Her: Sure. It's not crap. The parkour sequence is absolutely incredible.

Me: Agreed. That has to be one of the best set pieces the franchise has ever seen.

Her: Yeah. And the card game was enjoyable. Although its a serious step down in spectacle compared to, oh I don't know, para-surfing a tidal wave caused by a giant sun laser.


Me: But what if there was no Bond in Casino Royale and it was just a regular movie? Do you think you'd rate it higher than 'it's not crap'?

Her: I don't know. That's a difficult question. But I do know that Eva Green is excellent and Craig is great. And buff. Although I don't know that Bond should be that buff.

Me: What about the song and opening credit sequence?

Her: Both were great.

Her: Who sang the song?

Me: The song's called You Know My Name. Sorry, I thought you made a clever joke there.

Her: I really wish I did now. Can you just write it in your blog to make it so I actually did make that joke on purpose?

Her: Then I take back saying you were right.


BlogalongaBond will return in Quantum Of Solace.