BlogalongaBond: From Russia With Love 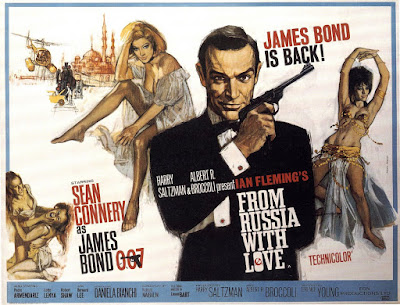 Her: So the Russians are stealing some machine from themselves?

Me: No, SPECTRE is stealing a Lektor decoder from the Russians with some help from James Bond. But he doesn't know it.

Her: When did they say it was a decoder? And what does it decode?

Me: It was at the start in the briefing with M. And it decodes Russian codes.

(Five-minute discussion about the plot and the Cold War omitted for brevity.)

And here's the rest of our post-film discussion (re-written in a mostly fictitious fashion):

Her: You know, I've heard so much about James Bond, he's supposed to be it-and-a-bit and awesome and everything, and everyone knows who James Bond is, but I'm not that impressed.

Her: Yeah. Look, don't get me wrong, Connery's great - I mean, the man's a stud - but the two movies so far haven't impressed me that much. From Russia With Love has too much shit at the start and not enough shit at the end.

Her: Ahh... there's too much quick dialogue that I didn't follow at the start and then a few too many naff action scenes at the end.

Me: Oh, okay. I don't know about the dialogue at the start - I thought it was good, and the script overall is great and a marked improvement on Dr No - but the end does kind of sag. From where Robert Shaw's Grant gets on the train until the end of his fight with Bond, it's great, tense, action movie stuff. But the helicopter sequence and the boat chase are a bit lame and the end of the film suffers as a result.

Her: Yeah, that's what I meant. That boat chase was so lame. Who decides to pull their boat over next to some highly explosive barrels? Seriously? That was rubbish.

Me: Good point. And why would you save a grenade to drop on James Bond after you've already flown a helicopter perilously close to him on numerous occasions?

Me: Did you like the stuff on the train?

Her: Yeah, that was pretty good.

Me: I love that fight scene on the train between Grant and Bond. Once Grant gets on the train, the movie steps up a notch, and then that fight is incredible - so close and intense, like some kind of Bourne predecessor.


Her: Agreed. Do you like From Russia With Love better than Dr No?

Me: I think Dr No has more spectacle, but From Russia With Love is a better film overall - the script is sharper, the direction has improved, and the characters are more solid. Kerim Bay is an excellent Bond sidekick, Grant and Colonel Clebb are brilliant villians, and Tatiana Romanova is a much better Bond girl than Honey Ryder.

Her: You're just saying that because you think Romanova's hotter than Ryder....

Me: It's not just because of that but fair point....

Her: You know something that bugs me in the two 007 movies we've seen? It's the women. I'm no bra-burning feminist, but the chicks in the first two Bond films just frustrate me. Why do they act so subserviant and puppy-dog-ish? Did women really act like that in the '60s?

Me: Well, I know I'm getting on in years, but - believe it or not - I wasn't around in the '60s. However, that element of the Bond films is very dated, whether women really acted like that or not. Does that get in the way of your enjoyment of the films?

Her: That statement presumes I'm enjoying the films in the first place.

Her: Well, I haven't said "will you just piss off with the Bond films already?" yet, have I?

Her: Look, they're okay. But I don't see what all the fuss is about. They don't live up to the mystique of "James Bond", this supposedly awesome movie character. The movies so far are like Paris - you spend all your life hearing about Paris and how wonderful it is and then you get there and it is wonderful but it doesn't live up to the expectations that everyone's been crapping on about. James Bond is like Paris.

Me: Nice analogy. The good news is that they get better. While From Russia With Love - and Dr No to some extent - are sometimes regarded as the best Bond films ever due to their simplicity and lack of over-the-top gadgets and the fact they have solid scripts, I think the best is yet to come. The next two - Goldfinger and Thunderball - are among my favourites because they seem more quintessentially "Bond". The first two films do feel a bit like the film-makers were still working on the formula. All the elements are there in the first two movies, but they're yet to coalesce into a complete project yet. Having said that, it's impossible to dismiss Dr No and From Russia With Love because they're groundbreaking films that created and defined some of the cinematic rules for action movies.

Her: You're doing that thing again where you make up a massive spiel to sound like a movie blogger, even though you didn't say any of that stuff in our real-life conversation.

Me: Shh, don't tell anyone.


BlogalongaBond will return in Goldfinger.