BlogalongaBond: The Spy Who Loved Me 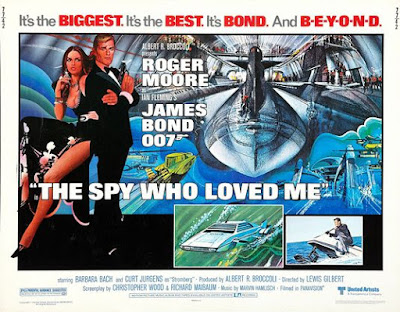 Her: Well, that was terrible.

Me: Oh no - is the Roger Moore love affair over?

Her: No, he's still all right. But the movie was terrible.

Me: Really? I thought it was quite good... at least as good as The Man With The Golden Gun.

Her: Wow. I'm surprised to hear that.

Me: I'm equally surprised by your response. This is actually considered one of the best of the Moore years. And we all know how you feel about him....

Her: I can't see how it's highly regarded. It was just so stupid in places. I mean, look at Jaws. How dumb is this guy? He's trying to kill Bond and Triple X and all he decides to do is start tearing the panels off their truck. And whenever he goes to bite someone with his stupid metal teeth, he takes forever, like he's in slow motion. Jaws is a rubbish henchman.

Me: Are you serious? Jaws is the first henchman that represents a proper threat to Bond since Red Grant in From Russia With Love - no hat-throwing, no mechanical arms, no acrobatic hot chicks with stupid names. Just a big powerful colossus who looks like he could squash 007 in one hand then bite his head off with his metal teeth.

Her: Yeah, a big powerful colossus with the IQ of wet towel. He doesn't pose a proper threat. The guy with the hat was more formidable. The guy with the mechanical arm was more imposing. The acrobatic hot chicks were... well, they were rubbish. And Jaws is equally rubbish.

Me: But he wrestled a shark! And then bit it to death! A freakin' shark!

Me: Was there anything you liked about The Spy Who Loved Me?

Her: There were four good things, and only four.

Her: Number one - the theme song was really good.

Me: Indeed. Nobody Does It Better is one of the best.

Her: Number two - Triple X is the hottest Bond girl so far.

Me: Really? She certainly has the coolest codename, but I don't know if Barbara Bach is hotter than Ursula Andress or Jane Seymour or Britt Ekland. I mean, she's hot, don't get me wrong, but is she the hottest?

Her: Yes. And she's got the best wardrobe. That dress she wears in Egypt is amazing.

Me: That's all well and good, but her acting is terrible.

Her: Yeah, but who cares when you look that good in a great dress?

Me: If you say so. What's the third thing?

Her: Number three - the set design was pretty good. Stromberg's lair looked pretty cool and inside the supertanker was good.

Her: And number four - the car that turned into a submarine? Awesome.

Me: Somehow I found that more believable than the car plane.

Her: But other than that, the movie was crap. Bad dialogue, bad story, Jaws, bad rear projection in the opening chase sequence... just bad.

Me: Well, I thought it was good. Even though there was a sense of deja vu with a lot of elements, I don't think the series has gotten too tired yet. Sure, the plot and villain are similar to You Only Live Twice and the idea of working and sleeping with the enemy has been done a fair bit and instead of a car-plane we got a car-sub, etc, etc... but overall I think it hangs together well. The film flows nicely, there are some great stunts such as the opening parachute escape and the car-vs-helicopter firefight, plus the locations are cool, Moore's still doing a bang-up job, and, although things are getting a bit cheesier, the campiness is generally kept in check. Plus, despite what you may say, I believe Jaws brings a real sense of danger. All in all, it's a solid outing.

Her: Well, I think that one's down near the bottom of the pile and they better start improving from here or else I don't think I can get through another 12 films.

Me: The bad news is that the next one is considered the nadir of the series.

Her: And it's got Jaws in it? How about we give it a miss and just tell The Incredible Suit that we watched it?

BlogalongaBond will return in Moonraker.