BlogalongaBond: For Your Eyes Only 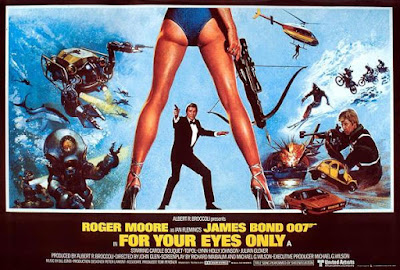 Me: Wow, that was soooo much better than Moonraker. I know that's damning it with faint praise, but it's hard to believe they came from the same series because this one is so good.

Her: Absolutely. Moonraker is as bad as For Your Eyes Only is great.

Me: Indeed. After the extravagant insanity of Moonraker, this seems like a back-to-basics approach. Just good, old-fashioned Cold War shenanigans with the film following the classic spy formula - none of this "I'm trying to take over the world" nonsense or massive space battles with frickin' laserbeams or stupid sup-plots about giant henchmen falling in love.

Her: And thank the gods for that. But you can tell we're into the '80s for this one, which creates all new problems. I'm not sure that I like Sheena Easton's theme song, and some of the other music in the film is a bit too "holy crap, we've just invented synthesizers" for my liking.

Me: True. And the title sequence under the Easton song was pretty average.

Her: That's an understatement. I would have said it was crap.

Me: So '80s-bashing aside, what makes this a good Bond film?

Her: The stunts were amazing. The chase down the luge track is very cool.

Me: Hell yeah. I'm not sure who did a better job - the Bond stuntman skiing down the luge track with no ski poles or the motorcycle stuntman chasing him.


Her: Also the helicopter scene at the start was great - that was some tight chopper piloting.

Me: The stunt that blew my mind was in the mountain climbing scene where Bond is climbing up to the Greek monastery. The stuntman had to take a massive fall halfway down a cliff face and then hope that the rope would hold him - I don't care how many safety wires and back-up plans you have going on, it's still scary as hell. That was a 100-metre plummet, maybe more.

Her: As always, the stuntmen are awesome. And the stunt drivers.

Me: Oh yeah, the car chase is great. And I don't think I've ever seen a car chase where the characters have had to get out of the car, roll it back onto its wheels and then push-start it to get the chase happening again.

Her: Yes, that was very cool.

Her: I dunno... it just felt more grounded and less silly. The plot was a lot more believable.

Me: Agreed. The race to recover a piece of secret military hardware is much better and more exciting then repeating the idea of starting a new society in space or under the ocean. Or whatever the hell Diamonds Are Forever was about.

Me: Aside from the slightly more realistic Cold War intrigue of it all, I liked that Bond was a little more ruthless and the film was less jokey... except for the ridiculous Margaret Thatcher post-script. Also, the Bond girls were better developed. Melina had her whole revenge plot, and even the ice-skater, for all her annoyances, felt like a fresh and unique character.

Her: The ice-skater wasn't a Bond girl. You're only a Bond girl if you shag Bond.

Me: I think you're a Bond girl if you get a decent-sized role in a Bond film.

Her: Nope. He's gotta shag them. That's the rules.

Her: I've got a couple of questions though. Bond visiting the grave at the start of the film - what was all that about?

Me: That was the grave of his wife who died in On Her Majesty's Secret Service.

Her: Hmm, I thought so. But why put that in there?

Me: I dunno. I've always liked the theory that James Bond was a persona... like a position that you got promoted to at MI6. "Yeah, I started here on work experience, worked my way up to field agent, and now I'm James Bond."

Her: The grave scene doesn't fit with that theory.

Me: Unless this James Bond was doing it as a sign of respect to the previous Jame Bond....

Her: Wouldn't he just visit the previous Bond's grave?

Me: Ok, I think my mind's slowly blowing... let's stop talking about that.

Her: Another question: why the hell did Melina leave an oxygen tank on the bottom of the ocean?

Her: Final thought: my favourite bit was the villain dragging Bond and Melina behind a boat to kill them. That was cool.

Me: Yeah, but I wish villains would just shoot people, like in the wild west. Those were the days....


BlogalongaBond will return in Octopussy.