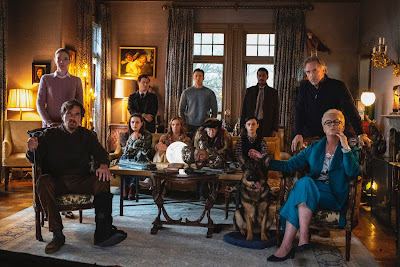 If I made a few tweaks and deleted all the references to moustaches, I could probably get away with re-running my review for Kenneth Branagh's Murder On The Orient Express here. A sumptuous-looking and neatly told murder-mystery with a killer cast, delivered by a top-notch director recently returned from a mega-franchise? Yep, that's it. Print it.

Of course, that's all superficial stuff because these are two very different films despite being cut from very similar cloth. Knives Out nods its head to Agatha Christie and the classic supersleuths, but this is a thoroughly present-day version of that particular idiom.

But Knives Out isn't revolutionary and falls well short of being a post-modern Poirot, Murder, She Tweeted, or maybe a millennial Miss Marple. It's not re-writing or even really re-examining the genre, which does feel like a missed opportunity in Johnson's hands. But it is a solid, fun, occasionally bonkers, and very enjoyable twist on an old tale,

The death at the centre of this murder-mystery is that of murder-mystery writer Harlan Thrombey (Plummer), who is believed to have suicided following his 85th birthday party. With his entire family in the house for the occasion, and with most of them on the receiving end of some tough love from the patriarch, it's anyone's guess as to what really happened, and who may have been responsible.

Enter Benoit Blanc (Craig) - a private detective of some acclaim who has been invited to the Thrombey residence by a mysterious employer to unravel the foul play that is afoot.


With strong characters played by an excellent cast, and a neatly tied mystery, Knives Out does most things pretty well. If you're a fan of the genre, which is mostly relegated to TV these days, this is a great excuse to head to a cinema.

It does feel a little underdone though. There is so much potential in the Thrombey rogues' gallery, all of whom have motives, but we don't get a good look at their opportunities to be killers. In fact, the film basically tells us what happened about halfway through, leaving the remainder of the story to deal with cover-ups and a twist that is satisfying yet somehow still underwhelming.

Still, it all flies by with good humour and fine pacing. The cast is picture perfect, led by de Armas as Harlan's nurse Marta. She's the rose among the Thrombey thorns, and a wonderfully naive yet determined character. Her presence allows for some pointed political commentary, but de Armas ensures Marta no mere cypher or plot point. It's another great turn from this star on the rise, who has shone in bit-parts in War Dogs and Blade Runner 2049.

Also worth mentioning are a deliciously smooth Evans and a jocular Craig. Both relish their well-written roles and steal every scene they're in. A supremely (and deliberately) annoying performance from Collette, a well used Curtis, and some fine work by the under-rated Johnson are flavouring on top.

Rian Johnson is obviously a fan of the genre, and this is a loving but not slavish homage to the great whodunnits. Stylishly filmed and wonderfully over-the-top in its production design, this is slightly hammy fun in the hands of a stellar cast.
Posted by DrMattNeal at 02:46