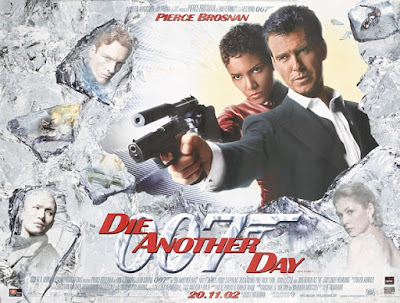 Her: Do we really have to do this again?

Her: But what is there new to say? Blah blah Brosnan's good, over-the-top plot, the Bond girls are okay, the theme song sucked, the whole thing was pretty lame....

Me: Yes, well, we probably should put a bit more effort into it than that.

Her: Fine. Start working then, film-boy.

Me: Okay... umm... Die Another Day is actually better than I remember. It's still stupidly over-the-top, but there are elements that work well, as with most of the bad Bond films.

Me: As is typical of some of these movies, they start well and then go off the rails in a big way. The opening scenes in North Korea, Bond's torture as part of the credit sequence, his eventual release, and his journey to Cuba were solid, but it went a bit skewiff after that. The gene therapy, solar energy laser beams, palaces made of ice, the invisible car, wind-surfing a tidal wave, a fight in a room full of lasers, a final showdown on a burning plane... they just piled the crazy upon the insane. It's almost as if this Bond film is set in some kind of parellel universe - most of the other movies have at least tried to keep one foot in reality.

Her: It felt to me like I was watching a sci-fi film sometimes. I mean, the bad guy was wearing half a Robocop outfit at one point... for no apparent reason either.


Me: And sci-fi never goes well for Bond. Remember Moonraker?

Her: But I have to ask - is this really that much more over-the-top and bonkers than anything else we've seen? The invisible car is obviously ridiculous but still kinda cool....

Me: Actually, the military is working on such a cloaking device, so that's less far-fetched than some of the other things in the film. I think the real issue is that Die Another Day just piles on one thing after another and it becomes too much. The film slowly gets louder and more annoying until it feels like you're being yelled at by a crazy person who likes blowing things up.

Her: I think there were more explosions in that film than any we've seen previously. I don't know that that's a good thing.

Me: Did you have any good things to say about Die Another Day?

Her: Hmmm... Brosnan is always good to watch. And the Bond girls were pretty good.

Me: Jinx was going to get her own spin-off film at one stage.

Her: Let me guess - Halle Berry went and did Catwoman first and everyone went cold on the idea?


Her: I know she doesn't quite count as a Bond girl, but I have to say Madonna wasn't totally terrible.

Me: Her song was.

Her: As for the rest of the film... meh. Whatever. How many is that we've watched now?

Me: Twenty. That one apparently has a reference to every previous Bond movie in it, and I thought that having watched them all in the past year and a half we would have been able to spot them all, but I only picked up a couple.

Her: Halle Berry's entrance was obviously a reference to the first one. And there was the jetpack from one of the Connery ones.

Me: Yep. The fake crocodile was in the background in Q's lab as well, and the Union Jack parachute got another run. The laser beams reference Goldfinger, the shoe with a blade is out of From Russia With Love....

Her: Yes, yes... is it possible they just put that little "spot the references" game in there to distract you from how bad the movie was?

Me: It's definitely possible.

BlogalongaBond will return in Casino Royale.