BlogalongaBond: The World Is Not Enough 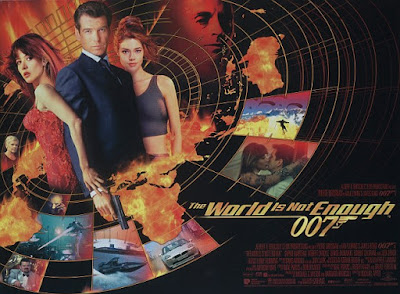 Her: So... Denise Richards.

Her: And she's a nuclear physicist.

Her: In tiny shorts. And a singlet.

Me: Well, I guess somewhere out there, in the world of nuclear physicists, there has to be one that dresses and looks like her... right?

Her: That may be the case, but it doesn't take away from the fact that she stands out like the proverbial dog's bollocks. And she couldn't act her way out of a paper bag.

Her: And she's the worst thing in a mostly boring Bond film.

Me: Yeah. The only good thing that comes out of her presence in the movie is that Brosnan seems to be trying extra hard to compensate for her deficiencies.

Her: Well, yes, he's very good in this. But Denise Richards? Really? As a nuclear physicist? Really?

Me: Look, I'm not going to defend her at all. She may well be the worst Bond girl of all time. She's certainly the worst aspect of The World Is Not Enough.

Her: Which is saying something. It's not very good.

Me: Agreed. I mean, it has its strong points but overall it's fairly flat and lifeless.

Her: What are its strong points?

Me: Well, I think the plot is reasonably good. Oil pipelines were a big deal in the post-Soviet era, and the terrorist plot that goes along with that is okay, and I think Elektra King is an interesting Bond girl who comes with some intriguing twists.

Her: I don't have any issue with the plot, generally. And Elektra King was a good character. I'm not sure if I agree with Bond's thing of stroking her hair after he shot her. I mean, be a man about it. She nearly killed him with some weird... chair. Sorry... I'm going to say that again: "She nearly killed him with some weird chair". That's a strange thing to have to say... although not as strange as saying "Denise Richards plays a nuclear physicist".

Me: Yeah, good point... but back to what you said about Bond's feelings for Elektra - I didn't mind his attitude in the wake of shooting her. We got Bond, the spy, having to shoot a woman he's bedded because his job says he has too, and we also got Bond, the man, feeling remorse for having to shoot a woman he's bedded. It's part of the dichotomy of Bond that makes him an interesting character yet it's not something we get to see in every movie. And Brosnan played it well.

Her: Whatever. Bond needs to harden up. That was weak. She tried to kill him with a weird chair!

Me: Fair enough. Is there anything you did like about the movie?

Her: I dunno. Renard was an interesting character. And the song was good. I like Garbage. But so much of The World Is Not Enough bugged me. Especially Denise Richards.

Me: Yes, we've been through that. You know what bugged me? The fact that Bond and Denise Richards just rolled off the back of some weird hoversled thing at high speed in a tunnel and it didn't kill them or at least mess them up severely.

Her: That bothered you?

Me: For some reason, yes.

Her: But what about all the other crazy stunts in the previous films? How is that any worse?

Me: Most of those stunts were performed by stuntmen - someone actually did those things. The pipeline stunt is the first sequence we've seen in a Bond film that uses large amounts of CG and I think that took it to a new level of preposterousness I wasn't willing to go to. That broke my suspension of disbelief. I can understand the filmmakers would want to use the available technology to take the series to new limits, but somehow it seemed a step too far. This Bond film and the next one got criticised for taking 007 way over the top, and I think that pipeline scene is the moment that did it for me.

Her: But he's done some insane things prior to that. You were willing to buy into all of those, but not rolling off the back of some weird pipe sled at high speed?

Me: I guess not. That just annoyed me. Not as much as Denise Richards, but quite a lot.

Her: So what did you like about the film?

Me: Well... the theme song was good. And that boat chase at the start was pretty cool until it got silly and involved a hot air balloon and the Millenium Dome, although it did seem to go on forever...

Her: Yeah, that's when the boredom started sinking in for me.

Me: ...but I'm not sure about your assessment of Renard. I really like Robert Carlyle, and the character was... interesting, I guess, but I just felt a bit underwhelmed by him. Maybe I just expected more.

Her: Fair enough. Any parting words?

Her: What do you mean "last moments"?

Her: Are you saying Q's gone? No more Q?

Me: I'm not saying anything further about Q. Except that I was sad.

Me: Anyway, my other final word is on Judi Dench. She's easily the best M, because she's awesome, but I just like seeing M more involved. And getting kidnapped is about as involved as M has ever gotten. And it's a plus for the movie. The more Dench, the better.

Her: It is a plus. But the movie's still bad. Please tell me we're almost done.

Me: We're almost done. One more Brosnan, two Craigs, and then Skyfall.

Her: And then I get some awesome jewellery for taking part in this bizarre form of torture, right?

Me: Bizarre form of torture?

Her: Watching Denise Richards play a nuclear physicist is a bizarre form of torture.


BlogalongaBond will return in Die Another Day.