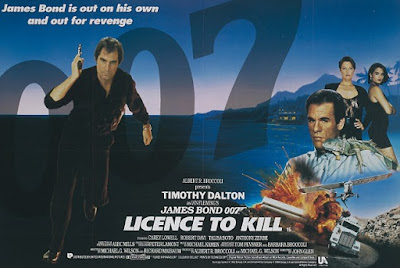 Me: I know you hated Dalton and The Living Daylights... I'm almost afraid to ask what you thought of Licence To Kill.

Her: I actually liked it. It's quite good.

Me: Wow. So are you on the Dalton bandwagon now?

Her: Oh god no. He still looks like a child about to throw a tantrum whenever he gets angry and I question his acting credentials, but the film itself is really strong.

Me: It's the plot, isn't it? Bond going renegade to seek revenge for his friend, hunting down a drug lord as opposed to a "take over the world" villian.

Her: Absolutely. It's a solid plot, and I'm very grateful that at no point does he say "this time it's personal". And all those things you said previously about The Living Daylights being darker and Dalton being an edgier, steelier Bond are actually true about Licence To Kill. Bond is far more ruthless this time. You were talking out your arse regarding The Living Daylights.

Me: Hey, who gets paid to be a movie critic here? The reason Licence To Kill is so dark is because they built upon the foundations laid by the previous film....

Her: Whatever. Look, my point is this one actually feels tougher. Bond really tells M to shove it... then shoves him... and the violence is more graphic. And I guess Dalton does actually have an edge to performance this time around. Instead of winning plush toys for floozies at carnivals.

Her: Well, there are some flaws, obviously.

Me: Can I have a guess at what one of them is, because it stood out like the dog's proverbials to me?

Her: Go right ahead.

Me: The film was travelling really well until about the 50 minute mark when it seemed like the scriptwriters suddenly realised they hadn't introduced a proper Bond girl yet as a love interest. So then they had 007 meet Pam Bouvier at a bar, hint at a past connection and wham, they're making out in a boat in a matter of minutes. It comes out of nowhere and it's not convincing.

Her: Got it in one. If ever there was a Bond film let down by the performances and use of its Bond girls, it's this one. Both Lupe and Bouvier go from being passable to atrocious in their acting, but what's even worse is how the script has them both seem totally head-over-heels for Bond with little build-up.

Me: Lupe's "I love him!" proclamation is the worst. I reckon she'd met him for a matter of minutes - spread out across the film - before she said it. And as good as I think Dalton is, he never projects the kind of love-at-first-sight swoon factor that Connery had.

Her: So it's agreed - the Bond girls are rubbish.

Me: Well, Carey Lowell didn't look half-bad when she came in with that short haircut. So it's not a total loss.

Me: Wardrobe inadequacies aside, what about the rest of the film?

Her: The villain was good - he was the right mix of being the kind of guy you'd want to hook up with but know you shouldn't because he'd probably end up feeding you to his sharks. All good drug dealers should have that mix.

Her: And the stunts were really good.

Me: Hell yeah. The opening scene where they catch a plane in mid-air with a helicopter is stunning, as is the final chase involving a fleet of petrol tankers and a rocket launcher.

Me: What did you think of Benicio Del Toro?

Me: He was Sanchez's sidekick.

Her: The young guy? He was forgettable.

Me: What about those evil looks he had all the time? He was a cool henchman.


Her: I think you're just saying that because it's Benicio Del Toro.

Me: No, I genuinely believe he was good.

Her: Sure you do.

Me: Well, anyway, aside from the few negatives we've mentioned, and the theme song being lame aside from the start and end, I think we're agreed that Licence To Kill is a pretty good Bond outing. It's darker, it's tougher, and no one says "this time it's personal". That's a win.

Me: Are you disappointed there's no more Dalton?

Her: No way. Bring on Brosnan. Now that's my idea of a Bond.

Me: How can say that when you haven't seen any of his films as 007?

Her: Whatever. He's hot.

BlogalongaBond will return in Goldeneye.