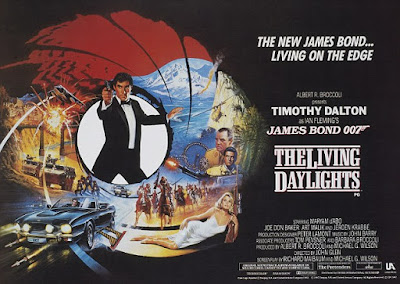 Her: So what did you think?

Me: That was great. I loved it.

Me: Seriously, it's excellent.

Her: You're pulling my leg aren't you?

Me: No, I'm not. Dalton's a great Bond, the plot is excellent, the stunts are great... what's not to like?

Her: Woah. Really? You actually liked The Living Daylights?

Me: So not a fan of Dalton then?

Her: No! Had he even acted before this movie?

Me: Bunch of films, Shakespeare, theatre, TV... he was actually asked to play Bond back as far as On Her Majesty's Secret Service.

Her: Well, George Lazenby did a much better job than Dalton.


Me: Wow. I have to disagree. Dalton is a darker, steelier Bond. He's edgier.

Her: No, he's not. He's soft. He's a teddy bear. James Bond does not win stuffed toys for girls at carnivals. He shags them and moves on. He doesn't fall in love. Dalton's Bond is weak.

Me: Rubbish. He's a more-rounded character, bringing some much needed edge to the series. He tells another agent "stuff my orders", he interrogates Pushkin at gunpoint with barely contained rage, he supercedes another spy's plan so it can be done better and doesn't give a damn about what M thinks. Dalton plays Bond as a proper spy, not a winking comic relief that was on the verge of descending into parody.

Her: Barely contained rage? Is that what you called it? All I saw was a man unsure if he was going to be able to pull it off. He looked like he was about to wee his pants. And I don't think Dalton's Bond did any more rebelling against M than any other Bond. And I won't hear a bad word said about Roger Moore, who incidentally did not look like an onion in A View To A Kill, thank you very much the person who wrote that in their BlogalongaBond entry last month.

Me: Hey, I'm not bad-mouthing Moore - he did a great job. But the series had to evolve and Dalton was the Bond we had to have. As good as A View To A Kill was, it still felt like a '70s or '60s throwback, and Bond needed to modernise or the series would have died out. The Living Daylights actually feels like a proper action movie of the time, instead of another jokey, slightly goofy, "keeping the end up for the Queen"-style of Bond adventure. That type of Bond film had a used-by-date and it had arrived - Moore got out at the last possible moment before it got too ridiculous. But The Living Daylights and Dalton have got a style and a tone that fits with the actioners of the late '80s, the likes of Die Hard and Lethal Weapon, which is what the film was competing against. Yes, there aren't as many jokes, but it's not entirely humourless, and by getting back to a more realistic, espionage-focus, while not shirking on the great stunts, The Living Daylights ensured 007 would live to fight another day, and not become a farce.


Me: The villains were great. In Necros, Koskov and Whitaker we got the brawn, the brains and the bonkers you need in your Bond villains. And Maryam d'Abo was a strong Bond girl - she performed well and her character was interesting.

Her: Look, I don't agree with any of this. The filmmakers forgot what they were doing. They introduced a new Bond, a new Moneypenny, a new tone, and it doesn't work. Maybe if they'd introduced these things gradually, it would have been all right, but this lacks the humour and excitement and charisma of a proper Bond film. I don't approve of it at all. This is down there at the bottom of the barrel with those other Bond films I didn't like and whose names escape me because I have trouble differentiating one from the other after 15 bloody Bond films.

Me: You're probably not going to like the next one then.

Her: I'm not opposed to change. This isn't about it all being new and strange and scary. It's about being Bond. And that wasn't Bond.

Me: Oh well. At least it might actually make this blog interesting for a change.

BlogalongaBond will return in Licence To Kill.