BlogalongaBond: The Man With The Golden Gun 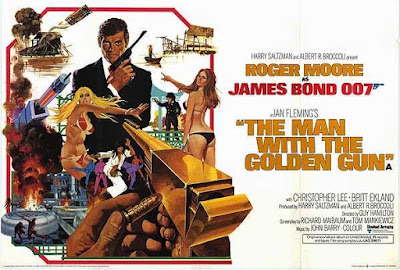 Her: This may be controversial, but I think Roger Moore might be the best Bond so far. Maybe it's just the films have been better or that I haven't seen a bad one with Moore in it yet, but he's my favourite.

Me: Are you just saying that 'cos you think Moore is sexier than Connery?

Her: Definitely. Moore's two from two in my book. I don't think he's as cheesy as Connery, or he doesn't have as many cheesy lines. Either way, I found this more enjoyable because it had fewer groan-worthy moments.

Me: I know you loved Live And Let Die - is this as good as that one?

Her: No, probably not, although I found it more believable because it didn't have the voodoo stuff or people walking over alligators.

Me: But this one had a flying car... which is either the coolest thing ever or the lamest. I can't decide.

Her: Yeah. Ok, except for that.

Me: It also had some of the worst kung fu fighting I've ever seen, which was obviously just thrown in to capitalise on the Bruce Lee craze.

Her: True. But do you know what was even worse than the crappy martial arts?

Me: Yes, I do - it was that stupid fucking sound effect they put over the barrel-roll car stunt. Perhaps the coolest stunt in the history of Bond, spoilt by some ridiculously infuriating whistle noise. It was like George Lucas making Darth Vader say 'Noooooooo!' on the Blu-ray edition of Return Of The Jedi. Way to spoil the moment.

Me: So what did you like about The Man With The Golden Gun?

Her: I really liked Tic-Tac.

Her: Whatever. He should have been called Tic-Tac. Because he's little, like a Tic-Tac. And that guy from Lord Of The Rings was good - Saruman.


Her: Whatever. And I thought the plot was pretty good. Nice and believable, flying cars aside. The title sequence was certainly better than Live And Let Die.

Me: Indeed, but that has to be one of the worst Bond themes ever - certainly the worst so far.

Her: Yeah, you're right. On the plus side, the set design was fantastic.

Me: Definitely. I think this was probably one of the best-looking Bonds yet. Scaramanga's lair was awesome, even his funhouse killing floor was great, and the skewed shipwreck-turned-secret base was stunning.

Her: I also liked the return of JW Pepper.

Me: Really? I found him barely tolerable in Live And Let Die, but just painful in The Man With The Golden Gun.

Me: No, I actually did. But it's weird - this was one of my favourites when I watched most of them as a teenager. I loved the barrel-roll car stunt, I loved the golden gun, and I thought Scaramanga was a cool villain, but I think I was blinded to a lot of the faults. Such as some of the plot-holes - MI6 doesn't test the golden bullet that is sent to them at the start of the film, yet Bond travels to Beirut to find another bullet connected to Scaramanga so it can be tested. Or how Andrea Anders doesn't tell Bond when they first meet that she sent the golden bullet and that he was the only man that could save her and only tells him much later in the film. Things like that bothered me this time around. Having said that, I still think The Man With The Golden Gun is good, despite its many flaws. As you said, the set design is great, Moore does a good job, Scaramanga is a great villain because he's Bond's equal and Lee plays him with subdued style, and the Bond girls are quite good. Maud Adams gives Andrea Anders the right amount of vulnerability and inner strength, while Britt Ekland's Goodnight is endearing because she's obviously trying hard to be a good agent yet is clumsy and clearly smitten with Bond.

Her: Yes, but how dumb is the bit where she hits the button with her button? How could you not know when you've hit something with your butt?

Me: Maybe she has a desensitised arse?

Me: Whatever. Look, my point is that for all its flaws, The Man With The Golden Gun somehow works. It never quite tips totally into stupidity or campiness, but it never quite achieves the greatness of Live And Let Die or the better Connery films.

Her: Well, I liked it. It's one of my favourites.

Me: Many Bond afficianados consider it to be one of the worst.

Her: They're obviously jerks.

BlogalongaBond will return in The Spy Who Loved Me.