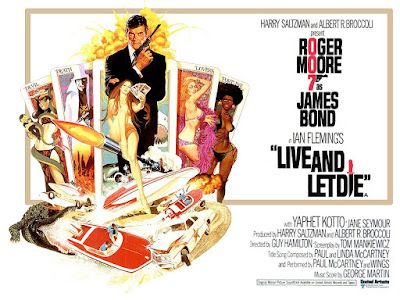 Her: Yep, best one so far. Hands down.

Me: I enjoyed it too and think it's one of the better Bond films, but I'm intrigued as to why you liked it so much.

Her: It's just great. All the characters are great, the plot makes sense, the action sequences are strong and Roger Moore is an excellent Bond.

Her: Absolutely. I mean, Sean's hotter, but Roger's perfect in this. He slots in perfectly.

Me: True. From that very first scene, you just accept him as Bond. He seems so comfortable in the role - he has that right blend of suave coolness and physicality that 007 needs.


Her: Absolutely. When we watched the one with George in it (On Her Majesty's Secret Service) you had to get use to him, but think I just went 'oh yeah, he's Bond' within a matter of minutes of Live And Let Die opening. In fact, I don't think I even thought about it.

Me: He does get a few too many goofy puns though, but that's not his fault and he delivers them pretty well.

Her: Oh yeah, there's still a bit of cheesiness there. But I like Moore already.

Me: Well, just so you know, he's responsible for some of the most poorly regarded Bond films.

Her: Don't tell me that! You're ruining the surprise! La la la, I can't her you!

Me: Sorry. But I did really enjoy Moore's work and I'd rate Live And Let Die as one of the best so far - up there with Goldfinger and Thunderball, maybe just ahead of You Only Live Twice.

Me: Well, for starters: Best. Bond theme. Ever.

Her: Is that your sad love of Paul McCartney shining through there?

Me: No. What are you talking about?

Her: Nothing... Paul lover.

Me: Shut up. Look, Paul gets a bad rap for his post-Beatles work, which is totally unfair... I mean, look at Baby, I'm Amazed or Band On The Run... just because he wasn't as edgy as Lennon, but....

Me: Sorry. But it is the best Bond theme ever. That's a fact.

Her: Whatever. What else do you like about the movie?

Me: I thought the plot was good. Just a bit of good, old-fashioned heroin smuggling. And the film moved along nicely. The boat chase through the bayou perhaps went on for too long - I swear that lasted 20 minutes - but even then it was still enjoyable. Some of those stunts involving the boats sliding across roads and lawns and back into the river were outstanding. But the best stunt has to be Bond running across the crocodiles.

Her: Yeah, that was incredibly cool. Do you think they were all real crocodiles?

Me: The last one was definitely real. I suppose you could fake the other ones, but either way it was very cool.

Her: What about the Bond girls?

Me: I think that in Solitaire and Rosie Carter we have two of the best Bond girls to date. I mean, Jane Seymour's acting was probably a bit sub-par, but both characters were actually interesting and given a bit more to do than just be a bit of tail for 007. Rosie gets a few good lines and funny moments and Solitaire is a really intriguing character who adds more depth to the voodoo side of the film and Kananga's character, while being well fleshed out herself.


Me: I dunno - she just didn't cut it for me. Her delivery, her emotional display... I didn't buy it sometimes. Still - great character.

Her: I thought all the characters and performances were good. Actually, that's probably a contributing factor as to why I liked it so much. I didn't cringe as often... or at all. I thought Felix Leiter was quite good.

Me: And the villians. So many great iconic villians - Kananga, Baron Samedi, Tee Hee, even Whisper. They were all unique and had a sense of danger too them... except Whisper. Although it was pretty damned funny when they blew up his couch.

Her: Ha, yeah! That was great.

Me: So, overall, best Bond film so far?

Her: Undoubtedly! Bring on the next one - I can't wait!

BlogalongaBond will return in The Man With The Golden Gun.