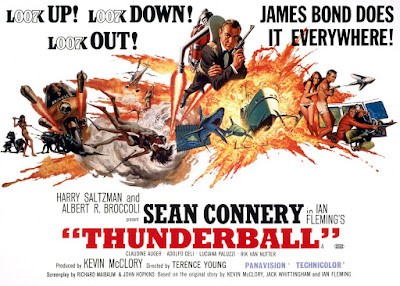 Her: Well, that was actually a good one. I enjoyed that.

Me: And yet you fell asleep halfway through it last week and we had to try again.

Her: I got tired. Sorry.

Me: That's ok. I'm just glad you actually liked it. Maybe this whole James Bond thing is growing on you.

Her: Maybe - let's not get carried away. But yes, Thunderball is, in my opinion, the first really good one.

Me: Even better than Goldfinger?

Her: Yeah. I mean, that underwater battle at the end is great. I've never seen anything like that before.


Me: Indeed. And how cool is Bond in that sequence, just cruising through the fight, stabbing a guy here, cutting off a dude's oxygen there. It's brilliant - we get to see 007 in a whole new scenario.

Her: Plus I think the plot in this one is great. None of this "irradiating the world's gold" nonsense - just some good old-fashioned nuke stealing.

Me: I like the way the plot sort of rolls along. Bond happens into it all by chance really, and then detectivates his way closer and closer to the nuclear missiles.

Her: "Detectivates" isn't a real word.

Me: So what? Neither's "Thunderball".

Her: Yeah. The red-headed assassin chick (Volpe) is great because she seems like the first real equal to Bond, even more so than Pussy Galore. And Domino was a good character. But that Paula chick - she was useless. Why was she even in the film? Her character could have been cut and it wouldn't have made any difference.


Me: True. Although I found Felix Leiter mostly useless. Although he often is in the Bond films, except to pop up conveniently and save 007's arse.

Her: Do you think this is a good Bond film?

Me: Absolutely. It's certainly on a par with Goldfinger and I rate that one highly. The formula is set, Connery's on a roll, and they haven't gone totally berserk with trying to up the ante on the previous films.

Her: Except for the rocket pack?

Me: What about it? Those things were real.

Her: Oh come on. That bit was naff.

Her: Well, what did you like about the film... other than the stupid rocket pack?

Me: Thunderball has my favourite line of any Bond film: "Do you mind if my friend just sits this one out? She's just dead.". That's awesome.

Me: The aforementioned underwater battle is very cool. And the SPECTRE meeting is so iconic, especially with the explosive chairs. Tom Jones does a great job with John Barry's hastily written theme song - that last note is a killer. And Largo is an excellent villain - you can't go past a villain with an eye patch. But the beauty of his role in the film is similar to Goldfinger's. In both films, they get to share a lot of time on screen with Bond, sussing each other out while remaining gentlemanly and polite. It creates great tension and fleshes out the villains a bit more, so they're not just cardboard-cut-out bad guys.

Me: That final bit on the out-of-control boat... that hasn't aged well, with its shoddy rear projection and horribly sped-up footage. But I can't think of much not to like about Thunderball.

Her: Well, I'm glad we watched it.

Me: And I'm glad you stayed awake.


BlogalongaBond will return in You Only Live Twice.