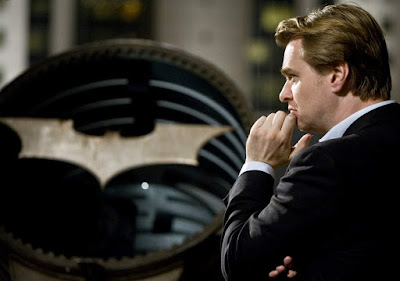 From 2000 until 2010, there were few directors who could rival Christopher Nolan. He had a Pixar-like strike rate of awesomeness. Across six films - from Memento (2000) to Inception (2010) - he did incredible things. He made us think backwards, rebirthed an iconic character, made the greatest superhero movie of all time, gave us remarkable performances from the likes of Robin Williams and Heath Ledger, and took us into a dream inside a dream inside a ... well, you get the picture.

Then he made The Dark Knight Rises and Interstellar and oh how those films annoy me.

Anyway, to mark the release of Dunkirk (and to respond to this list by my friend and fellow movie buff Eddie) and to fulfil my ongoing need to reduce someone's life's work into a pithy list, here is the Absolutely Definitive And Unquestionably Correct Listing Of Christopher Nolan's Films From Best To The One I Haven't Seen. 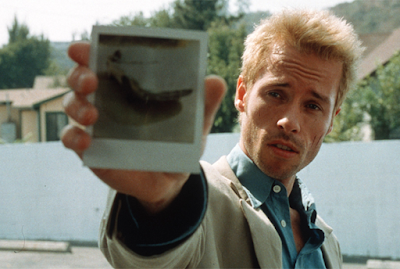 This remains the greatest script ever written. And do you know what beat it to the Best Original Screenplay Oscar? Gosford Park. Sheesh. Good film, but sheesh. You don't hear anyone in 2017 going "You know what film had one of the best scripts of all time? Gosford Park". But 17 years on from another oversight by the Academy, it remains mindblowing just how perfectly Memento's Herculean task of screenwriting works. And it doesn't merely "work" - it's not just a gimmick of writing, successfully pulled off. Memento goes beyond stunt-writing and becomes an incredibly enjoyable, gripping and surprisingly powerful film (poor Sammy Jankis and his diabetic wife). It's also surprisingly easy to understand and follow, which is a spectacular feat of directing and editing (as well as writing). Guy Pearce has given so many great performances and his turn as Leonard, the vengeful man with the broken memory, is up there with his greatest, but Matrix buddies Carrie-Ann Moss and Joe Pantoliano give career-best turns. The washed-out LA sunshine provides the film with the look of a faded polaroid and the score gets under your skin like Leonard's tattoos. It's not just Nolan's best but one of the best of all time. 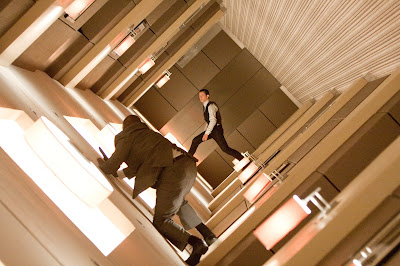 As time goes on, it's becoming increasingly difficult to give audiences something they've never seen before. Inception does it time and time again over the course of its two and a half hours, which is part of what makes it such a stunning piece of cinema. The key visuals are the folding cityscape and the spinning hallway punch-on, but the whole thing is a breath of cinematic fresh air, so much so that you don't even care that almost every line of dialogue is exposition. Nolan's trick here is taking us somewhere new, making it look familiar and continually giving you a kick whenever things get too comfortable. And how good is that cast. And that ending. And that sound. BRAAAAAAAWWWWRRRMMMM.

For the record, I totally nailed how awesome this was in my 2010 review, which almost never happens. 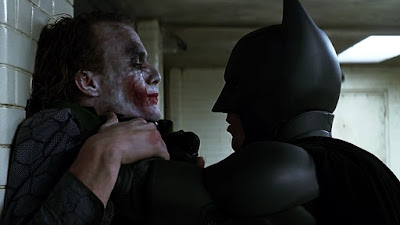 The greatest superhero movie of all time. The reasons for this are many. Ledger is the key one. His is a benchmark performance. Pity the fool who tries to be a Joker after him (too bad, Thirty Seconds to Leto) and pity anyone playing an unhinged supervillain after this. Ledger's shadow is long. Bale's good too, feeling as comfortable in the Batsuit as he is with his Bruce Wayne mask on. And that's another thing that makes The Dark Knight the best cape-caper to date - it explores the psychology of the superhero more deeply than any other example of the genre (except for Watchmen). Which is more real - Bats or Bruce? And how far will Bats/Bruce go to keep his version of the peace and protect Gotham from a person that probably wouldn't exist if the Batman wasn't going around doing his vigilante thing in the first place? This is all far too profound for silly superhero nonsense, right? And let's not forget that just about every shot in this looks superb. 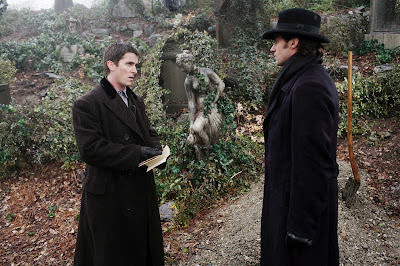 In which Batman and Wolverine start a magical war against each other - now there's a movie idea. But seriously, I can probably live without that knowing I can watch Bale and Jackman as obsessively driven prestidigitators trying to one-up each other at the end of the 19th century. It's a devilish plot, perfectly executed, led by great performances from its two stars (plus some great help from Scarlett Johansson, the late great David Bowie, and Nolan regular Michael Caine). Even knowing the twist, The Prestige remains thrilling, which is probably the real sleight of hand Nolan pulled here. 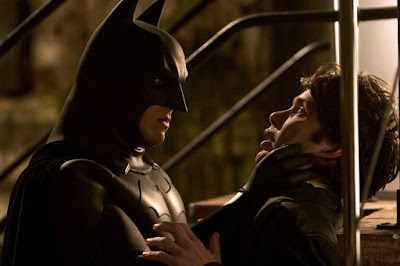 Nolan's trick with Batman Begins was to treat a superhero movie like a real movie. As simple as that. X-Men and Spider-man were great and relished their comic book origins, but Nolan went dark and deep and forever changed superhero movies. This was SERIOUS. DC built its entire Expanded Universe on this idea, and even Marvel took note for its MCU. "Nolan-esque" became a word with this film, and its definition can be found in the gritty reality he and co-writer David S. Goyer shoved the Dark Knight into, something which was a necessity in order to reclaim the character from the neon puke and '60s throwback of Joel Schumacher's previous Bat-outings. By throwing in Cillian Murphy's Scarecrow to the origin story, Nolan hit upon a rich subtext to drive the whole film - the power of fear. The cinematic superhero league would never be the same again. 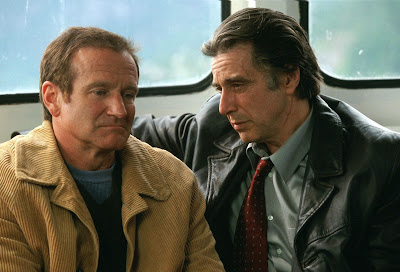 Robin Williams' "Dark Trilogy" of 2002 - One Hour Photo, Insomnia, and Death To Smoochy - provided the late legend with three of his best roles and gave us three of his best performances. That he out-performs and steals the show from Pacino, who was yet to become a caricature of himself, is testament to how good Williams is in Insomnia. On the surface, it feels like a bit of cruise control for Nolan on the heels of Memento - it's a Hollywoodisation of a then-five-year-old Norwegian thriller - but it's actually a supremely under-rated slowburning piece of Alaskan noir. Nolan gets the mood of the eternal sun landscape right and captures Pacino's insomniac cop Will Dormer (Dormer is pretty close to the French word for sleep BTW) mental unravelling beautifully. Well worth a revisit, if only to remember Robin.

As stated in my recent review, Dunkirk is damned near perfect, except for that annoying non-linear narrative Nolan's got going on in it. If it aims to demonstrate the different passages of time for the various storylines, it doesn't work. It's frustrating because Dunkirk is a powerfully minimalist, precise and punchy look at an incredible WWII story. Stripped of Nazis, flowery speeches and unnecessary characterisation, it's everything it needs to be and nothing more. It's also the cinematic equivalent of the British stiff upper lip.

This disappointing sequel is agonisingly close to being great, but its plotholes become so overwhelming that most rational brains stop working long before the end. It's a shame, because Bane is a great character and Tom Hardy does a cracking job. But its highlights - Bats Vs Bane, the football field explosion, the nonsensical opening plane stunt, Catwoman - get lost amid a fumbled theme about haves-against-have-nots and an erratic script. Sad end to what should have been one of the greatest trilogies of all time.

Here's my review from 2012, which is on the money but too generous with its star rating. 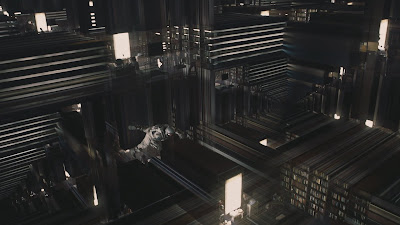 The more I thought about Interstellar, after its initial "wow" factor wore off, the more I hated it. Nolan's attempt at doing his own 2001: A Space Odyssey was ambitious but its final twist was too much for me. It's adherence to the laws of physics is (apparently) impressive and its visual spectacle is stunning, but its bloated running time, frustrating structure, under-developed characters and its plot-turn trickery are deal-breakers. Nolan disappears not into a blackhole, but more likely up his own derriere in this grand folly. McConaughey is great though. 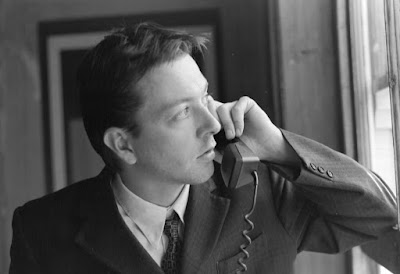 I haven't actually seen Following, but then neither have most people. So hardly anyone is going to be able to tell me I'm wrong about putting it at the bottom of the list. And those that have seen it assure me it's Nolan's least good film, so I'm going to trust them on that. So it's win-win really. As soon as I see it, I'll adjust this list accordingly though and be sure to let you know.
Posted by DrMattNeal at 04:15