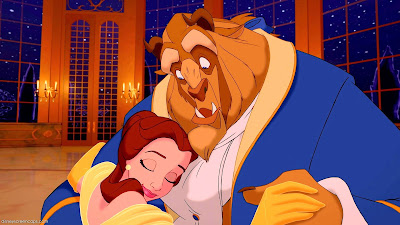 The age old story of one woman's love for a buffalo.

Upon its release in 1991, Beauty & The Beast marked a turning point for Disney.

Buoyed by the success of The Little Mermaid two years earlier - the House of Mouse's best film since The Jungle Book in '67 and the start of the so-called Disney Renaissance - the animation company had some wind in its sails once again. That renewed confidence is evident in Beauty & The Beast. While remaining true to what had come before, it is also a signpost pointing toward the future.

On the one hand, it's very much cut from the fairytale cloth of Cinderella and Sleeping Beauty, while retaining the goofiness of, well, Goofy and his style of talking-animal Disney comedy. The humourous sidekick Le Fou, the horse Phillippe, and the talking household paraphernalia all speak to the Walt era of Disney.

The classic Disney look is there too, although there is an extra level of depth and detail to the artwork. Note the slow zoom into the castle in the opening shot, with layers of foliage moving in and out of focus - this is just the first hint of what's to come. This newfound capability is courtesy of a fledgling company called Pixar, who introduced a new computer animation production system (CAPS) which Disney effectively road-tested on previous film The Rescuers Down Under. Pixar were also responsible for the CG backgrounds in the ballroom scene - a masterfully animated combination of the old and the new which showed the producers could see what was coming and weren't afraid of it.

The old and the new can also be found in Belle, a heroine who is brave, intelligent and independent, but still a romantic whose favourite book tells of a Prince Charming. Disney was moving forward but ensuring one foot remained in the past, something it continues to do with great success to this day - just look at how Frozen and Moana hark back to the "princess musicals" such as Beauty & The Beast while being thoroughly modern, especially with their heroines.

One of the unsung heroes of Beauty & The Beast is screenwriter Linda Woolverton. Of all the major film awards it was nominated for, only one was for Woolverton's script. The screenplay is so lean, tight, pacy and punchy, that even the special edition (which adds the song Human Again) is only 90 minutes long. There is barely a wasted second or piece of surplus plotting, and the whole thing crackles with energy. The entire set-up for the film, narrated by Ogden Stiers (who pulls double duties as Cogsworth), is wrapped up in a couple of minutes and its a good indication that there will be no stops on this service.

The only toilet breaks here are in the songs, but you'd be missing out. While the title track (which has the absolute shit oversung out of it by Céline Dion and Peabo Bryson in the credits) is probably the best known, the opening Belle and the humourous Be Our Guest are the standouts. Howard Ashman and Alan Menken, who also penned songs for The Little Mermaid and Aladdin until Ashman's death in 1991, were a match made in heaven (Beauty & The Beast is dedicated to Ashman).

It's often mentioned Beauty & The Beast was the first animation to be nominated for the best film Oscar, but what's not noted is that 1991 was a comparatively weak year. That's not to take anything away from Beauty & The Beast - it's a worthy nominee - but in a stronger year it's doubtful it would have made the top five. Silence Of The Lambs was a worthy winner, The Fisher King, Barton Fink and Thelma & Louise were notable omissions, and of the other nominees for best film only JFK is spoken of with any reverence (when was the last time you heard anyone rave about Bugsy or The Prince Of Tides?).

Still, Beauty & The Beast broke new ground while recapturing the spirit of Disney traditionalism. A more modern heroine, the incorporation of CG elements, and some Academy respect, combined with figuring out the essential qualities that made their past classics so classic helped pave the way for the House of Mouse's future, and indeed, the next few decades of animation. 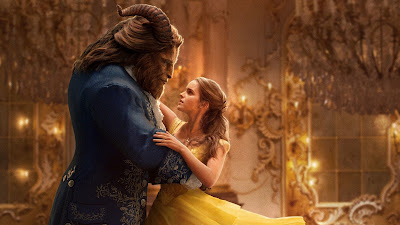 
Which brings us to the 2017 version of the western world's most beloved tale of Stockholm Syndrome.

(I'm fairly sure this wasn't mentioned back in 1991, but I've heard the Stockholm Syndrome thing mentioned recently because this is the time we live in. I don't say this by way of criticism or dismissal, I'm just saying. What does it mean? I don't know. But the fact is that's what the fairytale features, and so that's what the film features. There's also a little bit of the Florence Nightingale Effect going the other way too. What does that mean? I don't know. I'm not judging. I'm just saying. But will kids walk away from this thinking "ooh, if I kidnap someone they'll fall in love with me"? Doubtful, unless you're teaching your kids wrong to start with. Will your kids walk away thinking "there's more to people than just looks"? Probably, because that's the real message here.)

(Also, while I'm at, there are a couple of allusions to homosexuality in this and OH MY GOD IT WILL TURN YOU KIDS GAY IF THEY WATCH IT! Ha. Of course it won't, you fuckwit. It's 2017, for fuck's sake. Grow up, you ignorant douchebag.)

Anyway, here we have the latest live action remake of Disney's back catalogue of classics. Unlike Alice In Wonderland or Pete's Dragon, this sticks very close - beat for beat to be honest - to the 1991 version. This is a good thing. Those doing the remaking are obviously aware of what worked last time around and are sticking with that.


That includes the songs as well as the story. The first and biggest criticism to be levelled at the 2017 take is that it's added more songs and more story, the lean 90 minutes blown out to 129 minutes. Some of the extra minutes are necessary. The breathless pace of the animated world doesn't translate directly to live action, and characters such as Le Fou (Gad) and Belle's father Maurice (Kline) grow into more than the goofy cliches of '91.

But the new songs - particularly How Does A Moment Last Forever and Evermore - add nothing (it would have been preferable to see some variation of Human Again in the mix than those). As for the added story elements, did we really need to know what happened to Belle's mother? Or the Beast's mother for that matter?

What the live action version nails is its real life realisations of the characters. Watson makes Belle Hermoine 2.0 but it works. Evans is perfectly cast as the increasingly devious Gaston, Kline is great as Maurice, while the voice cast of the household objects is excellent (McGregor's dodgy French accent notwithstanding).

The look of the film is good too. It has the same magical realism of the live action Cinderella, but with a darker edge to match the story. The Beast occasionally looks a bit CG (mostly when he walks), but mostly he is a convincing creation.

If there's one thing the 2017 version does better, its humanise the Beast. The '91 version leans on the goofiness too often, while in this take he feels like a real character, which seems to be thanks to the script.

In general, B&TB2017 hits the marks it needs to but can never beat the '91 version. It does some things well, but ultimately this beast is more bloated than it needs to be.