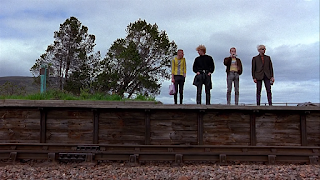 THERE'S no doubt Trainspotting is a remarkable film. The Scots themselves voted it their greatest movie of all time, while the BBC rated it #10 in its list of the best British movies ever.

But the film is even more incredible when you check out the source material. Irvine Welsh's 1993 tome is a collection of (sometimes vaguely) interlinked short stories covering about eight main characters and as many different points of view, and features entire sections written in 'phonetic Scottish' and containing inner monologues with Sean Connery. Of all the heroes in turning it into a film, screenwriter John Hodge is the most unheralded and yet perhaps the best on ground.

His script is razor-sharp. Even allowing for Boyle's directorial flights of fancy that blend fact and fantasy in fascinating ways, the whole thing clocks in around the 90-minute mark but covers a vast amount of ground, cramming in plenty of the book's good stuff while teasing a surprisingly gripping narrative and several excellent character arcs out of its material. Addiction, in all its permutations, is dealt with so deftly and succinctly at times that several viewings are required to take it all in. It's a masterclass in efficiency, condensing Welsh's wanderings into a compact story of four friends in Edinburgh, three of whom are addicted to heroin, with the fourth addicted to rage.

The '90s was a great time for drug films. From the party drugs of The Acid House (another Irvine Welsh book) and Go, to fellow heroin stories like The Basketball Diaries, to the toking and tripping of Dazed & Confused, Half Baked and Friday, through the nihilistic booze saga of Leaving Las Vegas, to the go-hard-or-go-home glory of Fear & Loathing In Las Vegas, each served its function. They could make us laugh or cry, depending on their tack.

None of them - not even the crippling 2000 film Requiem For A Dream - are as amazing as Trainspotting when it comes to exploring addiction. Boyle's bouncy dramedy rides the highs and lows by being funnier than it should be yet more harrowing, by being sicker and filthier yet more stylish. But its secret weapon is that its addictive element is the most disturbing. It's not heroin - it's friends.


Renton's (McGregor) inability to say "no" to his mates is as detrimental as his skag problem. Just when he thinks he's out, they pull him back in, leading to the film's denouement (which the entire sequel revolves around). His friends trusting him is also their undoing. And then there's Begbie (Carlyle). Being friends with Begbie is as dangerous as smack. Spud (Bremner) is accidentally stabbed by the psychopath, Renton is threatened with being neutered, and anyone within a 20-yard radius of the moustachioed menace is mere seconds from getting glassed.

If it's not Begbie's violence putting people in jeopardy then it's Sick Boy's (Miller) scheming. But even a butterfly wing-flap in this group has horrific consequences. The ill-fated Tommy's (McKidd) downward spiral is cause by Renton and a seemingly innocuous theft. Then there's the death of the baby, which is among the most traumatic, gut-wrenching things ever committed to celluloid. It's foreshadowed in the earliest moments of the movie, but repeat viewings don't make it any easier to handle.

None of this would work without its stars. The five who appeared on the poster - McGregor, Bremner, Carlyle, Miller and screen debutante Macdonald - would all go on to stellar careers and deservedly so. Each is outstanding; in fact, arguments could be made that all five have never been better. But spare a thought for Kevin McKidd, who has the worst/best of the character arcs as poor Tommy, but didn't make it onto the poster. His career, while still successful, never reached the heights of his co-stars. If only that poster went up to #6.

Then there's Boyle. Across his prodigious career, even acknowledging his Oscar-attracting Slumdog Millionaire or 127 Hours, or his brilliant genre pieces 28 Days Later and Sunshine, Trainspotting remains his best film. It's lightning in a bottle; an energetic cultural touchstone that comes along once in a career. It hits the ground running - quite literally - to the bombastic beat of Iggy Pop's Lust For Life and McGregor's ironic "Choose Life" speech, and that is just the first of a string of iconic moments littered throughout.

The worst toilet in Scotland. The OD sequence, with its red-carpeted tomb view, soundtracked by Lou Reed's Perfect Day. Spud's nighttime accident. The baby on the ceiling. These horrifying scenes not only stick with you, but they've edged their way into pop culture, as has the colour scheme and style of the aforementioned poster, and the brilliant soundtrack (would Underworld still be a thing if not for the success of Born Slippy .NUXX?). Sometimes no bog roll is the least of your worries.

There are other great moments that stand out on repeat viewings. Fresh from his OD, Renton's parents offer and share cigarettes - one of the subtle reminders of the prevalence of addiction. Similarly, Begbie's early lecture on the dangers of drugs while drinking and smoking heavily is typical of the film's black humour, set up right from the start. Also in that category is Spud's job interview (a great display of Bremner's skills), the air rifle scene in the park, and the details of Tommy's death, which conclude with an unexpected punchline that you'll hate yourself for laughing at.

But one of the best moments comes in the middle of the second act, at the top of Tommy's downward spiral, when he encourages his mates Spud, Renton and Sick Boy to join him for a walk in the wilds. Renton, after being told by Tommy that such a walk should make him proud to be Scottish, launches into a marvellous diatribe that sums up his thoughts on his homeland:

“It’s shite being Scottish! We’re the lowest of the low. The scum of the fucking Earth! The most wretched, miserable, servile, pathetic trash that was ever shat into civilization. Some hate the English. I don’t. They’re just wankers. We, on the other hand, are colonised by wankers. Can’t even find a decent culture to be colonised by. We’re ruled by effete assholes. It’s a shite state of affairs to be in, Tommy, and all the fresh air in the world won’t make any fucking difference!”

And yet the Scots still voted for this as their greatest film of all time. That's saying something.