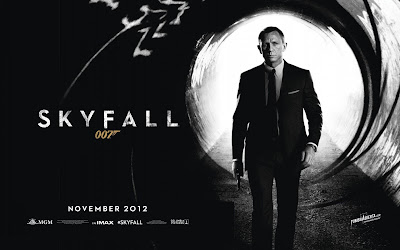 Me: Congratulations! You've made it the end of BlogalongaBond!

Me: Thanks for watching every Bond film with me.

Her: Thanks for nothing.

Me: Oh, come now, grumpy. Surely it hasn't been that bad?

Her: To be honest, they all tend to bleed together a bit. There were stand-outs, obviously, and memorable moments... but don't ask me to name the best ones because I can't remember the names. They're all "Tomorrow Is Never Enough" and "You Only Live Another Day" and "Golden Thunderlove". Having said that, Skyfall is a good one to wrap up this painful project because it's probably the best one.

Her: Sure. And if it's not the best, it's certainly well up there.

Me: What makes you say that?

Her: Well, it's got a great villain, who's actually really freakin' scary. He's not trying to do something stupid like start wars to sell newspapers or bite people with his metal teeth. He's just a psycho who likes to kill people. And he's got a weird face. And mummy issues. It's a perfect recipe for a bad guy.


Me: Silva is certainly memorable and disturbing. And Bardem does an outstanding job in walking that fine line of the over-the-top villain, balancing between chewing the scenery and underplaying things too much. What else did you like about Skyfall?

Her: Nah, that's it really?

Her: I liked the new Q. And Judi Dench's M is always great, but especially in this one.

Her: I dunno. I guess I just liked the fact it wasn't stupid. And that it wasn't seemingly edited by a blind toddler with epilepsy, like Quantum Of Solace.

Me: Yes, well, the less said about Quantum Of Solace the better. Casino Royale was far from stupid - is Skyfall better?

Her: Maybe. This one had a better villain.

Me: You didn't rate Le Chiffre?

Me: The villain in Casino Royale. He wept blood. And pummelled Bond's nuts.

Her: Are you agreeing?

Me: Not really, I still think Casino Royale is better than Skyfall. But this one is certainly more Bond-ish, which was one of your criticisms of Casino Royale. And I did enjoy that.

Her: So what are the downsides of Skyfall?

Me: I'm a bit torn over that. I liked that it took it's time, but it also felt a little slow in places. And it was nice to see a Bond movie with an actual narrative theme - old versus new - but it felt a bit overused.

Her: You're just being picky.

Me: Maybe. I have to say Skyfall looked stunning though. We've never seen a Bond fight that looks as good as the one staged in silhouette among neon signs, plus the whole last act in Scotland - probably the most unglamourous Bond locale we've seen - looks great.

Her: Speaking of the last act, that pretty much blows up your theory about each Bond being a different guy who just assumes the mantle of "James Bond".

Me: Maybe. It could just be a coincidence that they found an orphan called James Bond to become James Bond.

Me: Whatever. Look, thanks for watching all those movies with me. I know you didn't enjoy them all, but I've enjoyed our little chats.

Her: Yeah, well, it wasn't a total waste of time.

Me: Agreed. So, now that you've seen all the Bond films... will you marry me?

Her: Are you serious?

Me: Yeah. Will you make me the happiest man alive and agree to marry me?

Her: Because I've seen all the Bond films?

Me: Well, no. But now that that's all out of the way, I just thought I'd propose.

(PS. Ok, so it didn't quite happen like that - there was a ring, a restaurant, and I got down on one knee - but we really did get engaged after seeing Skyfall and wrapping up our BlogalongaBond conversation. It was a few hours after, but you get the point, which is "how can you ask someone to marry you if they haven't seen every 007 movie?".)


That's the end of BlogalongaBond, but you can read my review of Spectre here.