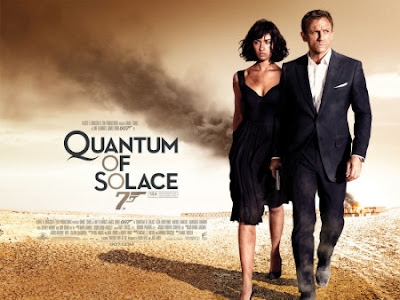 Her: Thank god it's all over and I never have to watch a Bond film again.

Me: Well, actually, Skyfall comes out next month....

Her: I said, "Thank god it's all over and I never have to watch a Bond film again!".

Her: I was actually bored. You couldn't see what was going on in any of the cool bits and frankly I didn't care.

Me: I know what you mean. I don't think I've ever seen a film so destroyed in the editing room. Why bother doing all these amazing stunts and setting up great shots if you're going to edit into an incomprehensible mess where you can't see anything? It's a pretty huge slap in the face to the amazing stuntwork and cinematography that's obviously going on in there.


Her: Agreed. There were car chases and plane chases and fights and none of them made any sense. I couldn't tell who was shooting at who.

Me: Were you really bored?

Her: Yeah. What the hell was it all about? Water?

Her: Big whoop. Is that what the series has come to? Out with the bonkers supervillains with giant lasers, in with the not-terribly-scary businessmen building large underground dams?

Me: I liked that there was an environmentally aware plot - I think it was another attempt to make Bond timely and relevant.

Her: Meh. Even with the watery plot, I still felt like I'd seen most of this before. The girl covered in oil on the bed - that's copying Goldfinger, right? Why bother doing that? It's been done.

Her: And the Bond girl, out for revenge 'cos someone killed her family? We've seen that before, too haven't we?

Me: Yeah, but I thought Olga Kurylenko did a good job. As did Gemma Arterton.

Her: Well, at least Bond got a random shag this time.

Me: And with a nicely obtuse pickup line too: "I can't find the stationery".

Her: That was a pickup line?

Me: Not really. After Casino Royale being so damned good, Quantum Of Solace is a bitter disappointment. There's a good film in there potentially, but the most terrible editing job of all time prevents the audience from settling in to enjoy any of the action sequences. It puts the rhythm of the entire film out of whack, and doesn't give its set pieces time to breathe. It always like it was rushing to get somewhere. The film should have been 10 minutes longer.

Her: Is that enough to ruin the film?

Me: In this case, yes. It's a shame really. Craig is good again, I think the plot had potential, and I liked the scene set during the performance of Tosca.

Her: Don't you think the people sitting next to the all bad guys would have told them to shut up? Holding a meeting at the opera is not a good idea.

Me: I liked the idea. There were some good ideas in there, but poorly executed, I think.

Her: What about the Bond theme? That was Jack White, yeah?

Me: Yeah, and Alicia Keys. I don't mind it - it's adventurous at least, although it does sound more like The Raconteurs than a Bond theme.

Her: So is that it then? Are we done? Is the hellish nightmare of BlogalongaBond over?

Me: Oh come on, you're being a tad dramatic. I know you liked some of them.

Her: Maybe. I just feel a little beaten into submission by them all now.

Me: Well, there's only one more to go and then I promise I'll never make you watch a Bond film ever again. And the last one you'll get to see on the big screen!

Her: I can hardly wait.

BlogalongaBond will return in Skyfall.

Hilarious podcast on the unexplained - New mini-season out now!