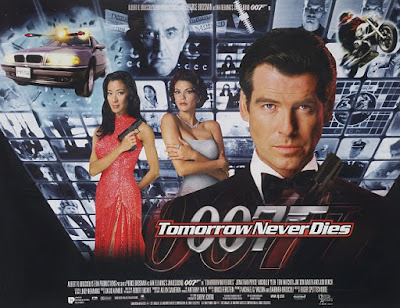 Me: I didn't mind that one.

Her: Me neither. It was alright.

Me: Thank the gods for that. I thought you were gonna flip out after Goldeneye and stab me in the throat with the shards of a smashed DVD if I asked you to watch another Bond film.

Her: Well, you're safe... for now. Tomorrow Never Dies was reasonably good. I'll probably save the stabbing for after the next bad one if it sucks.

Her: But given that we both seemed to like this one, it's probably going to make for a pretty boring blog.

Me: Probably. Although if I remember correctly, it's not a terribly highly regarded Bond film, so we might be being a bit controversial by saying it's good.

Her: But it is good. Great action sequences, a so-so story, and Bond girls that aren't simpering flakes who practically trip over themselves in an effort to get their knickers off for 007.

Me: Well put. Yes, the Bond girls are a major improvement here. They get rid of much of the cheesy romance and the mistaking of lust for love that hampers so many of the other films in the series. In fact, I would go so far as to say Michelle Yeoh's Wai Lin is probably the best Bond girl ever.

Me: She's a true equal to Bond, physically and intellectually, and that creates a new dynamic we haven't really seen in the series before. And it's an exciting dynamic because it adds an element to the action sequences that is fresh. You get Bond kicking butt, and you get the Bond girl matching him. And there was no one better for doing that than Michelle Yeoh - the greatest female action star who ever lived.

Her: I appreciated that Wai Lin didn't just throw herself on Bond - rather she waited until the pair had built up a believable relationship. That was refreshing. And even Teri Hatcher's Paris had a good-enough backstory that made her hook-up with Bond believable.

Her: Well, the action sequences were pretty cool. The remote-controlled car chase was silly but good fun, and the motorbike chase was a ripper.

Me: Yeah, that was very impressive, especially jumping a bike over a helicopter. I couldn't help but feel the bike chase and a lot of the fights were a reaction to the increasing popularity of Hong Kong action films at the time, which isn't a bad thing.


Her: The plot was a bit of a reaction to the time as well wasn't it? Media domination, journalists are evil... all that stuff.

Me: I remember reading that the big baddie Elliot Carver was based on Rupert Murdoch. Jonathan Pryce is a good actor and kind of fun in the role, but Carver has to be one of the worst Bond villains ever.

Her: I found him entertaining. Why is he one of the worst?

Me: He commits the two worst supervillain fails, not just once, but on numerous occasions - he doesn't kill Bond when he has the opportunity... several times, and he monologues incessantly. That was frustratingly stupid.

Her: He was kind of crazy though. That makes for an alright villain. Although starting a war to sell a few newspapers is a bit of a silly plot. Entertaining but silly.

Me: True. I think James Bond even points that out at one stage, calling it absurd. But it's at the still-believable end of the 007 Plot Scale. I bought it.

Her: I did too. For all it's silliness.

Me: The amount of explosions and '90s-style excess is getting alarming though. You can feel it heading into the ridiculous.

Her: Yes, but still staying on the right side of the line.

Me: Alright, what else can we say about Tomorrow Never Dies to pad out this blog?

Her: Well, it was funny, Brosnan is a really comfortable and likeable Bond, the song was good, the credit sequence looked cool... am I missing anything?

Me: Hmmm... it was well paced, there was a nice satirical element among the "media magnates are evil" thing, and M got some pearlers. Is too early to call Judi Dench the best M ever? She brings a real personality and connection to M that goes beyond the traditional "plot set-up" character that M has been.

Her: Agreed. So are we done yet?

Me: Almost. Two more Brosnans, three Craigs and you never have to watch a James Bond film again.

Her: I better be getting a really cool present for doing this.

Me: You probably should have negotiated that before we started.


BlogalongaBond will return in The World Is Not Enough.