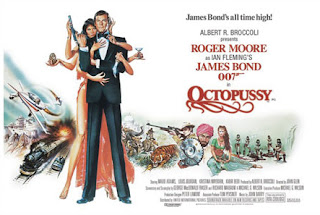 Her: Ok, let's get the obvious joke out of the way first - I was expecting a lot more eight-legged vaginas in that movie.

Me: Ha. It's a pretty schoolboy-ish title isn't it?

Her: We did get a laugh out of it though when Bond hears Octopussy's name for the first time and Roger Moore does a cool eyebrow raise. But you know what was really schoolboy-ish? Bond zooming in and out on that woman's cleavage while in Q's makeshift laboratory.

Me: Is it just me or was that a bit out of character for Bond? You know, just on the wrong side of sleazy?


Her: Oh come on - he's always been a bit sleazy. I think it was more schoolboy-ish, in the way that Bond always acts a bit bratty in those scenes with Q. He's always trying to push Q's buttons... often literally.

Me: I guess so. There is a grumpy old teacher/smart-arse student thing going on in those scenes, what with Q always telling Bond to pay attention and Bond doing something reckless or irresponsible.

Her: Like zooming in and out on a woman's boobs with a hi-tech camera?

Me: I suppose. That still just seems a tad too far over the line for Bond in my opinion. And it's part of the problem I had with Octopussy. It rides that line between bad Bond film and good Bond film pretty closely. While it's quite funny in places there are still a lot of groan-worthy gags, and while the plot is quite level-headed in places there are a few too many over-the-top moments. Like the crocodile submarine for instance.

Her: Are you kidding? That was cool.

Me: Or what about the fake horse' arse that flips up to reveal a light aircraft?

Her: That was also cool.

Me: And why was there an equestrian event so close to a military base?

Her: I have to admit I didn't get that opening sequence with Bond in the military base. Was that supposed to be connected to the main story? And where the hell was he?

Me: I think it was meant to be Cuba. And it wasn't connected to the main story.

Her: Oh good. I feel better about that now.

Me: But overall it's a solid story - a rebel Russian general using fake antiquities to fund his own private war on the west, including a plan to set off a nuclear bomb in an American airbase in West Germany.

Her: Yes, but don't you feel like it dragged in places?

Me: I guess. They probably spent too much time in India. I'm sure that could have been condensed down. I suppose that's another of the film's inconsistencies. The nuclear bomb plot moves at a cracking pace, yet the set-up beforehand in India takes too long. And while we're talking inconsistencies, some of the fight scenes were just terrible, and yet we get some great stuntwork throughout, such as the train sequence and that fantastic final battle on top of a plane at altitude.

Her: Wait - are you saying there was really a guy on top of that plane way up in the air?

Me: Yep. He probably had a safety rope and slim parachute on his back, but yes, there was definitely a guy on that plane way up in the air.

Her: Whatever. My favourite stunt was the car chase sequence. That had some serious speed to it.

Me: It sure did. I assumed that was the freedom of the German autobahns meaning they could go as fast as they wanted. Now, let's wrap this up with a final Bond checklist: theme song?

Her: Octopussy was good, but the blonde one was terrible. And badly dubbed in places.

Me: I thought we had passed the days of dubbing. And yes, the woman playing Magda was bad while, Maud Adams was quite good. Did you know she had already been a Bond girl before in The Man With The Golden Gun?

Her: I knew she looked familiar. That was bugging me for ages!

Me: Ok, what about gadgets?

Her: Loved the croc-sub. And the acid-squirting pen was cool.

Her: Octopussy was kind of a villain, right? She was good. Kamal Kahn was ok I guess and his bodyguard was okay. The crazy Soviet general wanting to blow up the American airbase was okay too I guess. Nothing stand out, but totally adequate.

Me: That's probably a great way to describe the film.


BlogalongaBond will return in A View To A Kill.