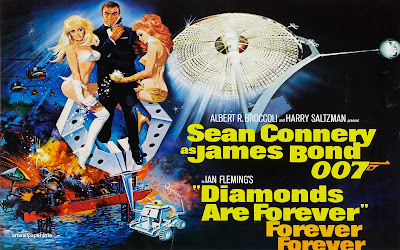 Me: Are you going to ask me why Sean Connery is back and what happened to George Lazenby?

Her: Ok. Why is Connery back and what happened to George?

Me: Well, Lazenby's agent told him that Bond was just a passing fad and not to sign on for an extended deal. And so the studio threw wheelbarrow-loads of money at Connery until he came back.

Her: Not really. I don't really care for Diamonds Are Forever. I don't care for it at all.

Her: At all. That was the worst one so far... even worse than the one starring poor George. It started well and then just got progressively lamer and lamer.


Me: Agreed. It started so well though. The first non-Bond-like shot of a pretty Japanese table, which was soon smashed by a good fight scene, and Bond finally tracking down a fake Blofeld, and the set-up of the diamond smuggling plot - all that was really good. I was hooked in the first 10 minutes.

Her: Yes. And then it all just got incredibly silly. And stupid.

Me: True. Did the plot even make sense? I'm not sure that it did.

Her: No, I don't think so. I got lost and bored... like I was in the world's crappiest maze.

Me: Did you find any redeeming features?

Her: I really liked Mr Wint and Mr Kidd. They were good villains.

Me: Yes, they were entertaining. They were menacing but funny, even if they were perhaps a throwback to that era when homosexuals were considered scary and weird and something to be feared. One of them was named Bruce Glover and looked a bit like Crispin Glover... do you think they're related?

Her: Who cares? This movie was just rubbish. The moon buggy chase was ridiculous, the finale on the oil rig was lacklustre and Tiffany Case's outfit changed colours halfway through, and the subplot with the Howard Hughes-like guy was unnecessary and stupid. And Bambi and Thumper? Bambi and Thumper? What the hell?


Me: Yeah. Calling out who is going to attack in a fight is not tactically brilliant, is it?

Her: You know what else isn't tactically brilliant? Leading a car chase into a small carpark.

Me: I guess, but that stunt driving to get through the thin alleyway was pretty cool.

Her: Meh. I feel very underwhelmed by this film... not even vaguely whelmed.

Me: Oh come on, there were some good lines and moments amid the increasing lameness. What about the gag when they throw Plenty O'Toole out the window? Or Bond's line to O'Toole: "You must have been named after your father?"? Or the fight in the elevator?

Her: Ok, they were fine. But Plenty O'Toole was terrible, and Tiffany Case's character was much like the movie - started out being interesting and just became annoying.

Her: Do we have to watch many more of these?

Me: Well, we've watched seven so we're about a third of the way there.

Me: I thought you were enjoying them.

Her: I was, but the last two have been rubbish.

Me: That's no reason to write off the whole series. We've got the Roger Moore movies to come next, then Dalton, Brosnan and Craig.

Her: Fine, I'll keep watching. But they better get better than those last two.


BlogalongaBond will return in Live And Let Die.